‘Smartvote Tibet’ attempts to fill gaps for a nascent democracy 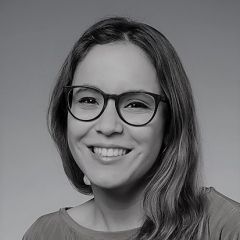 Screenshot from a SmartVoteTibet channel YouTube video encouraging Tibetans living in exile to participate in the upcoming Tibetan elections.

For Tibetans, a nation that remains stateless and scattered around the globe, and is yet committed to a democratic process for electing its representatives, cyberspace is the only space available where they can make an informed choice before casting their votes.

There are an estimated 6.5 million Tibetan people in the world. While the majority live in Tibet, there is also a large exile community in India, Nepal as well as in Western countries, issued from the Tibetans who fled their homeland following the 1959 annexation by China. While Tibetans in occupied Tibet are ruled by a government that is not elected, the Central Tibetan Administration based in India's Dharamsala has a leadership elected every five years. Even though the Tibetan government in exile is not officially recognized by any state, for Tibetans and particularly those living in exile, it represents a legitimate entity. Since the spiritual and political leader the Dalai Lama stepped down from his political leadership role in 2011, April 2021 will mark the third time Tibetans are able to elect their members of parliament and their president.

How to inform an electorate scattered around the globe?

Given the reality that the Tibetan diaspora is truly global, the main challenge is the reach-out that is further complicated by the COVID-19 pandemic.

The Tibetan election process takes place in two steps: preliminary elections, to select short-listed candidates to the parliament, that took place on January 4, 2021 with a 77 per cent turnout of the exile electorate. Those with the highest vote are then able to run for the main general elections, which will take place on April 11, 2021. On that date, the voters will vote for a new President and for the 45 members of the Tibetan Parliament in Exile.

Such transnational elections require considerable logistics for voting, but perhaps even more importantly, for campaigning, so that Tibetans can make an informed decision on the voting day. In order to overcome this challenge, a group of Swiss Tibetans came up with the idea of creating a reliable online platform to allow candidates and voters to communicate effectively.

Inspired by the advantages of the Voting Advice Applications (VAA), and with support from the Swiss organisation Politools that created a VAA called ‘Smartvote’ in 2003 for Swiss elections, the group built a smartvote Tibet application. The main concept comes in two steps: first, the candidates answer online questions on topics such as environmental or social policy, and then the voters answer the same questions, in the end the matches determine which candidate seems to agree the most with the voter's own political stance.

VAAs can be powerful because they not only have a positive impact on knowledge levels, but on voter turnout too. But perhaps more importantly, such platforms can help rebalance power relations between less advantaged candidates and privileged ones.

The main goal of the smartvote Tibet platform is indeed to support the voters during the opinion-forming process to get a picture of the candidates. The political positions of candidates are communicated in a transparent and comparable way so that they can not only be contrasted, but also held accountable later.

The team in charge of the platform developed a comprehensive questionnaire to accompany the formation of political opinions for a society relatively new to democracy. To increase diversity, Tibetan civil society was invited to submit questions to the project, with the help of an international advisory panel to maintain balance and objectivity. One of the main advantages of the system is that candidates can not skip a question, and need to express their opinion, including on issues that might be sensitive in Tibetan society, such as same-sex marriage for example.

As can be seen from this screenshot of the application below, future voters can get immediate information about the opinion of any candidate on specific and key questions, including identity, or  language. The black and white emoji represents a future voter's answer, while the orange color represents the opinion of a running candidate (showing alignment or differences visually): 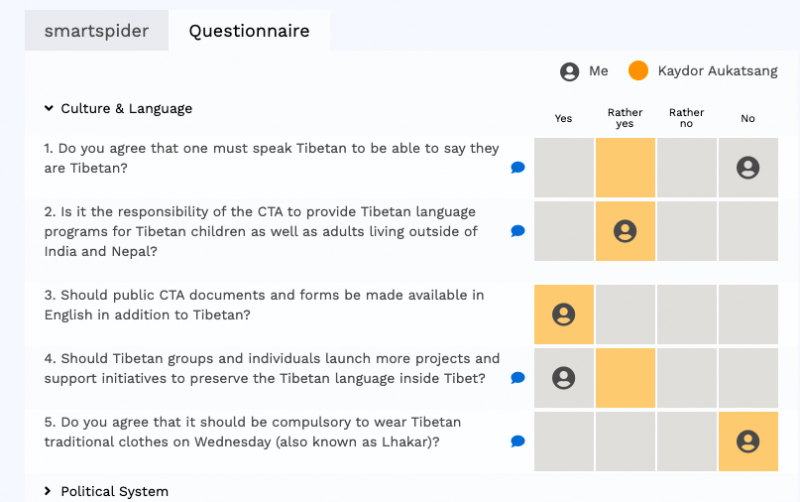 Online campaigning is far from perfect

But making sure that candidates and voters are able to use the platform comfortably and see its value remains a challenge. Indeed various problems arise, ranging from a lack of IT skills to a lack of understanding of the basic idea of the project. Indeed, some candidates could not see why it would be useful for them to fill in the online questionnaire and make their positions known transparently.

Another challenge is to make the platform known within the electorate: How can the older voters be reached? How can the tool be advertised in different countries? A considerable part of the Tibetan diaspora lives in simple conditions in settlements in India and Nepal where the infrastructure leaves a lot to be desired or, as in the case of Nepal, the long arm of China’s censorship can be felt.

The implementation of smartvote in a new context also shows the limitations and risks of such online voting tools. Highly standardised and simplified questions do not allow for detailed answers. Both the provider and users must therefore be aware of the opportunities and risks of such Voting Advice Applications.

A work in progress as a contribution to a young democracy

Despite the many challenges, the experiment shows interesting results: for the preliminary January election around half of the candidates created a smartvote profile. With around 80,000 people registered for the elections, the tool had already given over 7,400 election recommendations as of April 7.

The application is also discussed over social media, by members of the exiled Tibetan community:

Many congratulations to Project Democracy!

This being said, initial evaluations show a bias in participation towards Tibetans living in the West, presumably because of easier internet access. It is still too early to see whether and to what extent the use of smartvote Tibet can actually increase knowledge of the candidates’ positions and boost the willingness to go to the ballot boxes. But what is clear is that this bottom-up project brings new insights into the research areas of elections, democracy, diaspora and VAAs. Besides, it contributes to lively, fact-based, discussions within the Tibetan exile community.