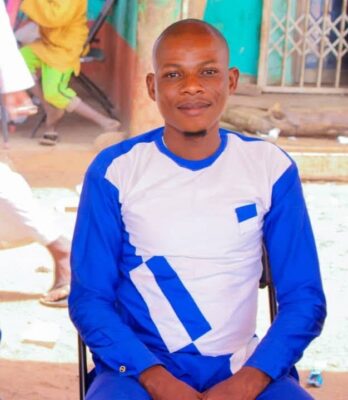 Photo provided by Alhassan Mohammed Awal and used with permission.

As part of our ongoing series highlighting the work of activists promoting African languages in digital spaces, we would like to feature Alhassan Mohammed Awal (@Alhassa51457950) from Ghana.

Much of Alhassan's work has centered on his work as a co-founder of the Dagbani Wikimedians User Group o help create free knowledge in his native language.

Rising Voices recently interviewed Mohammed Awal by email to learn more about his perspectives on his language finding its place in online spaces.

I am the Communications, Outreach and Campaigns Director for the User Group. I am also an activist for child-rights and girl-child education. My interest in digital activism includes promoting the use of various Wikimedia tools such as Wikipedia, Wikidata, Wikimedia commons, Wiktionary and any other Digital language support tools available to facilitate my language activism work on the internet.

I want the Dagbani language to go global and fill up every available digital space. I envision having the language recognized by all search engines on the internet. Outside of the Wikimedia community, I am an educationist working in the Ghana Education Service (GES). I worked as a classroom teacher, Headteacher, appointed an examination Officer for Nanton District Education Directorate in the northern region of Ghana and was later reassigned to become a Basic Education Coordinator and I am currently a School Improvement Support Officer (SISO). In addition, I am passionate about writing and volunteerism. 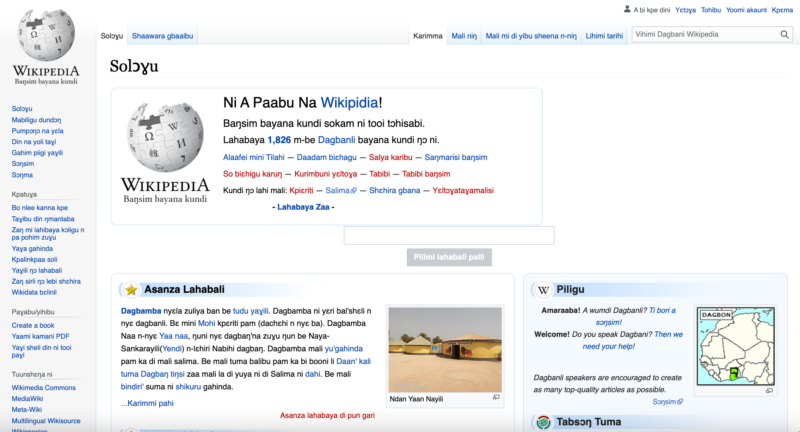 Screenshot of the Dagbani Wikipedia.

AMA: Dagbani is one the under-represented languages online. Unlike other languages with which one can access information by searching for instance on Google, the reverse is true for Dagbani.

When it comes to offline, there are some Dagbani materials/books in some schools and in few public libraries but they are not easily accessible or free-to-use. It is only in one university where the Dagbani language is studied as a course, even though only few students are interested in studying the language. Many Dagbani natives are interested in studying the English language and other courses at the universities at the expense of their own language.

What are your motivations for seeing your language present in digital spaces?

AMA: Dagbani is one of the 16 Mole-Dagbani ethnic groups of languages (which are interrelated and trace their roots to a common ancestor) spoken in the northern region of Ghana. The speakers of this language alone (out of the 16 interrelated languages) are estimated to be over 3 million people. This is one of the biggest languages spoken in Ghana. As a self motivated language activist, I want the Dagbani language to go global and fill up every available digital space. I envision having the Dagbani language recognized by all search engines on the internet.

AMA: One challenge is the over glorification of the English language. The stigma associated with Dagbani language teachers is that only those who are not good in the English language are the ones studying/teaching the Dagbani language. Hence, for one to be Karimba (Dagbani teacher) even your students do not take you seriously because they do not wish to become like you. How then do they “waste their time” creating Dagbani content online?

Those who cross the hurdles to study the language at the University often end up not being employed by the Ghana Education Service to teach, especially in the basic schools where children can be caught young to develop interest in creating content online in their mother tongue.

Also, the language is not being supported by many technological tools like iOS keyboards with Latin characters to type in Dagbani.
Another is a lack of skills to create online contents

AMA: It is necessary for Digital Language Activists like myself to create platforms and roll out creative programs to equip young people with the necessary skills to create content in their mother tongues.

Initiatives such as the ones our team have been doing, that is creating over 500+ Dagbani lexemes on Wikidata, rolling out Dagbani Wikipedia Saha, a TV broadcast program initiated to teach people especially the young ones in all corners of the country on how to edit on Dagbani Wikipedia, translation of online materials into Dagbani, audio recording of over 4,000 Dagbani words and uploading same on Wikimedia Commons, and many more are all fun and attractive ways of engaging the young people to creating contents in their languages.

Governments should support in recruiting and resourcing people who study Dagbani language into our schools to provide proper guidance to school children to develop interest in using their own language.