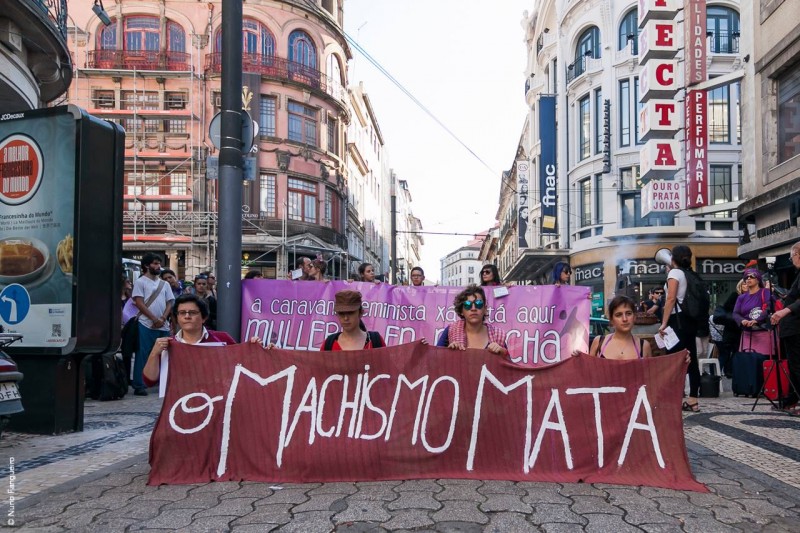 An intensive month of feminist debate and mobilization in Porto, Portugal led to the birth of a Feminist Collective.

Inspired by the announcement that the International Feminist Caravan would be passing by the city of Portugal in October 2015, a group of local associations, collective spaces, and individuals decided to organize something together for the first time to welcome the activists and to strengthen the weak representation of the feminist agenda in the Portuguese public sphere.

The Feminist Caravan was part of the World March of Women’s 4th international Action in Europe. It consisted of a physical caravan which crossed the continent of Europe starting from Turkey / Kurdistan to Portugal, from March 6 to October 17, 2015.

“A group of feminist activists from different countries were living with the Caravan and at the same time, were meeting with women who organised local events and gathered documentation about women’s struggles.”

In Porto, the initial idea for organizing activities during the two days that the Feminist Caravan would be in town (October 12-13), escalated to a whole month of daily events, bringing together for the first time a broad network of feminists in Porto, invading the city with feminist actions and debate and spreading the seeds of longer-term relationships in building a local feminist movement.

The Festival has also contributed to dismantle prejudices about feminism, as well as to create bridges between different feminism. Through the organizational process, links were established between some of the organizers / participants, who are now creating a feminist collective – something nonexistent in Porto before the festival.

The open call led to greater inclusion. Instead of having the program simply defined by the roughly 10 people who participated in the first meeting of Festival Feminista, a public call for proposals was launched in which the Festival ended up receiving more than 50 proposals. This allowed for a very diverse and inclusive way of approaching feminism. The number was a surprise, as you don’t often hear about “feminism” in Porto – at least one didn't until the Festival!

The process through the establishment of working groups built trust and tolerance among the organizers and participants.

Different projects came out of the Festival, as some elements of the team realized that they could work well together and continuation.