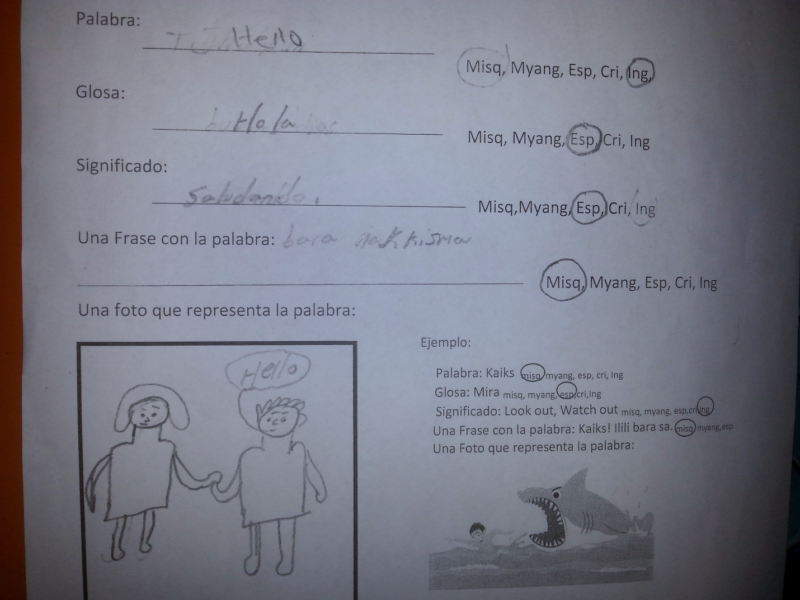 Example of a page from the dictionary in English, Spanish and Miskito.

This is the third article about the “Miskito and Mayangna on the Internet” project, grantee winner of the 2015 Microgrant call to support digital activism initiatives for indigenous languages. The project is being carried out in Nicaragua and seeks to strengthen local languages with the active participation of young people.

After the completion of the first stage of the project, the students in the Leadership School created comics with themes such as: “Living with AIDS”, “Racial Discrimination”, “Bullying,” “Caring for a patient”, “Luhpia Saura, Luhpia Pain ” and “Liwa Máirín“. These entries were written in three languages: Spanish, Mayangna and Miskito.

At the end of this phase of the project, the instructor had a meeting with Elizabeth McLean, the only Mayangna linguist from the URACCAN University, who explained that the Mayangna elders in Siuna and Bonanza–which are Mayangna communities in the North Caribbean Coast–did not agree with online publishing material written in the Mayangna language. Ms. McLean explained that any video, website or dictionary published in Mayangna could not be posted outside the Mayangna communities. Thus, the students were instructed to set any website in Mayangna language in offline mode. This situation created an opportunity for the students to discuss the views regarding the linguistic diversity among indigenous communities on the Caribbean coast of Nicaragua and in other countries.

After they were requested not to publish content in Mayangna language on the internet, some students of Miskito origin asked: “Why could we publish materials in Miskito language and not in Mayangna?”. They said that they wanted to share their language with the Mayangna students, but that this intention seemed not to be reciprocal. The instructor had to explain that this situation was not unique to that local context, but these are attitudes which sometimes arise in all kinds of scenarios. The instructor added that communities in many other regions have the same views and that indigenous communities have the right not to share their knowledge. Following these discussions, it was decided that the videos, websites and dictionaries in Miskito could be published without restrictions, while materials in Mayangna could not be disseminated on internet or in spaces outside the northern Caribbean communities.

After expressing a personal perspective on writing, the instructor planned a meeting with Ms. McLean to create files for the digital dictionaries in Spanish, Miskito and Mayangna. Both the instructor and Ms. McLean were interested in supporting the writing in the two indigenous languages, and this position was largely due to their linguistics training. They translated into local languages terms like “words, comments, meaning and phrase”. Later, the students filled the files with their first entries of digital dictionaries. In a later meeting, the instructor and Ms. McLean prepared a lesson to explain to the students some particular aspects of the language structure, such as differences between nouns in Miskito and Mayangna, focusing primarily on expression of possession and pluralization.

Three classes on creating the multilingual dictionaries were carried out. In the first session, a worksheet was used for the first entries, and many students chose to write greetings such as “naksa – hello” and “nakisma – how are you”. Before this, the participants were recommended to follow the dictionary structure that had been prepared, in regards to words, comments, meanings, examples of phrases, and even images. Once the students were able to understand how to configure the entries for the dictionary, they proceeded to generate a greater number of entries.

The students decided to create two trilingual dictionaries, in which, in addition to local indigenous languages, English and Spanish were also used. The strategy was to create word lists in Miskito and Mayangna, and then to translate them into Spanish and English. The interest to include the two major languages mainly comes from the fact that students have classes in English and Spanish at the university.