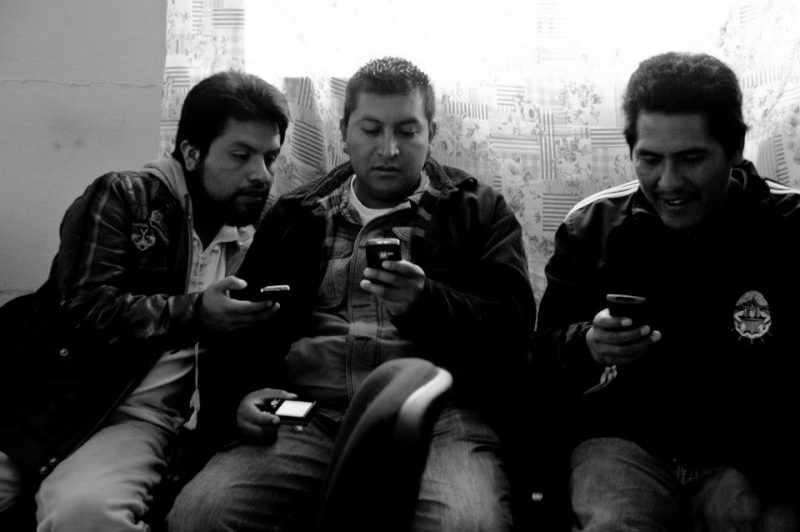 Photograph from the public Facebook profile of Redes, A.C., an organization that is part of Indigenous Community Telecommunications, A.C. Used with permission.

Indigenous Community Telecommunications, the first and only association of community and indigenous service provider that facilitates affordable mobile phone and internet services to rural areas of Mexico, might be forced to stop operating after the national telecommunications regulator demanded the network pay one million pesos (more than 50,000 US dollars) for the radio frequencies it uses.

This non-profit, community-driven structure has given economically marginalized indigenous communities greater and more affordable access to mobile communications networks than they had in the past. The local, community governance of the network means that people are able to use it on their own terms, rather than those of a large corporation.

The project had originally provided GSM (2G) mobile phone service to around 20 isolated communities in the southern state of Oaxaca under an experimental license. With the IFT's historic decision, Indigenous Community Telecommunications was authorized to provide voice and data services, to operate for 15 more years, and even to expand to the states of Guerrero, Chiapas, Veracruz and Puebla.

Such agreements typically require the provider to pay a set fee for the use of radio spectrum, but in this case, Indigenous Community Telecommunications filed a writ of amparo requesting an exemption from payment. They made this request in light of the fact that their operations are not-for profit and have no commercial use.

Rhizomática—the organization in charge of facilitating the construction and maintenance of infrastructure for Indigenous Community Telecommunications’ networks, and a beneficiary of one of the grants by Rising Voices to establish these networks—explained the differences between the community and commercial telephony.

One of the most important differences is the central role that the community plays. Commercial telephony depends on the decisions of the operator and is for profit. Community telephony, however, depends on the decisions of community members. Instead of profit, its objective is communication among communities, who are often located in remote areas, and maintenance of the network.

The chart below breaks down the differences: 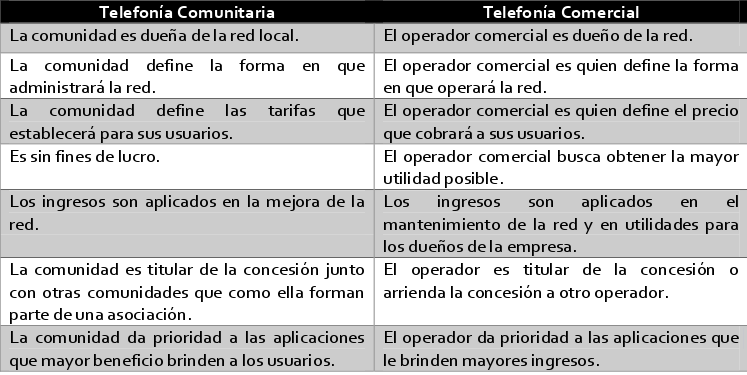 A network for indigenous community use is not designed to earn money, and thus could never afford to pay such high fees. The network provides mobile phone, SMS and data services to more than 3,000 households in remote areas for 40 pesos per month (USD $2 per month). In addition, of the 40 pesos charged, 25 go to the community and 15 to the association (The Indigenous Community Telecommunications), which invests this money in the maintenance of the network.

However, on November 15, 2017, as reported by El Financiero newspaper, the Second District Court for Administrative Matters in Economic Competition, Broadcasting and Telecommunications denied the request for exemption.

We have a concession title for indigenous community use of certain frequency bands of the radio spectrum. The title was granted in September 2016, and for the 2016 and 2017 period they are charging us 900,000 pesos, plus what continues to accumulate over the years. […]

We provide service to communities that are not viable economically and that can obviously not pay this amount of money, plus we are not profit-oriented as commercial operators are. 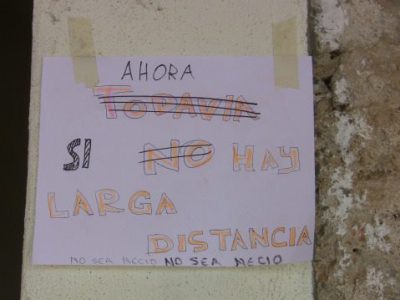 In the photo: A sign letting costumers know the service is not available gets corrected. The original messages reads (mainly in orange letters): “There are no long-distance calls yet. Don't be stubborn”. Once the community-based mobile network started working in the village, they crossed out some of the words of the original message for it to read: “YES, there are long-distance calls NOW”. Photograph taken in Talea de Castro, the first community beneficiary of the networks facilitated by the Indigenous Community Telecommunications. Available on the public Facebook profile of Redes, A.C.

Currently, the resolution adopted by the Second District Court for Administrative Matters, Specialized in Economic Competition, Broadcasting and Telecommunications is being legally challenged by Indigenous Community Telecommunications.

We think that we have the legal arguments to win the writ of amparo and allow us to be exempted from the payment. This is the only telecommunications service that these communities have, historically they have not been covered, they do not have services, the networks do not reach them, we believe a clear exemption for this type of operator should be in the law.

Commercial operators have long argued that these communities do not represent profitable business for them. As a result, since 2013 these communities have learned to operate the technology themselves, as well as oversee the economic and legal administration of such services.

The current battle over radio frequency fees touches on how important it is for the country's telecommunications regulator to establish a management model in accordance with the reality of Mexican indigenous communities.