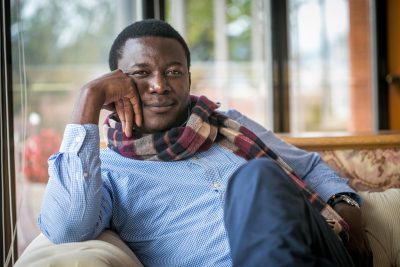 In 2019 as part of a social media campaign to celebrate linguistic diversity online, African language activists and advocates will be taking turns managing the @DigiAfricanLang Twitter account to share their experiences with the revitalization and promotion of African languages. This profile post is about Kọ́lá Túbọ̀sún (@kolatubosun) and what he plans to discuss during his week as host.

My name is Kọ́lá Túbọ̀sún (I began to put diacritics on my name as a permanent feature in 2015 after we released the free tonemarking software for Yorùbá/Igbo for Mac and Windows). I am a linguist and creative writer (with interest in travel writing, journalism, and poetry). I’m currently a Miles Morland Scholar, working on a nonfiction book, while leading a team at YorubaName.com working on a couple of language, lexicography, and documentation tools, and another at Google working on Natural Language Processing.

Yorùbá, like most Nigerian languages suffered a setback with the economic downturn of the early eighties to late nineties. Publications ceased in the language, and most parents bought into the idea that exclusive English language education was the path to success, so they stopped speaking their languages at home. All of this, along with other forms of neglect by policy makers subsisted until the internet came to add insult to injury, so to speak. Not much was published online in the language until recently, with the arrival of the BBC Nigerian language services, and before then YorubaName.com, and a few other platforms. Online, it was hard to write the language because there were no (free) tools to apply diacritics to Yorùbá, which are important for disambiguation, but also because millennials who grew up with the deficiency in their knowledge of the language found no reason to use it. So we’re at a stage where I and many others believe that all our indigenous languages are threatened or endangered. I mean, we don’t even know how many people speak any of the languages we have.

RV: On what topics do you plan to focus during the week that you’ll manage the @DigiAfricanLangTwitter account?

I plan to talk and think through some current challenges we have in language use, attitudes, and documentation on the continent; and share some progress in our work, and plans for the future. I also hope to meet people in other parts of the continent doing similar things, and engage in relevant conversations on our work and directions.

It started as being personal: I couldn’t put tone marks on words and on my name. And the more I probed, the more I realized that the people in charge of the web and other software applications never cared, because the innovations they worked with always needed to have commercial impetus. But now, having been in it for over a decade, I’m motivated for the community. There are thousands of people, and thousands of languages, that can be helped by the creation of digital tools and solutions. It has economic implications for us as a people. If you can use an ATM in a local language, then people who speak that language can put their money in the bank, and become part of the digital economic universe. If we can create tools for disabled people, which can speak to them in their local languages — or to which they can speak in the local language — then they feel more integrated in modern life, in society. So I’m motivated because language is life. Empowering our languages empowers us all. But most of all, I’m motivated by the pleasure I get from the work I do.

I hope it not only survives, but that it thrives — in as many domains as English and other world languages currently do.