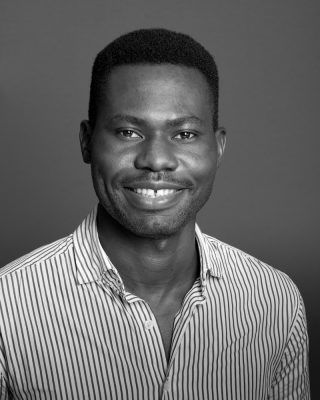 In 2019 as part of a social media campaign to celebrate linguistic diversity online, African language activists and advocates will be taking turns managing the @DigiAfricanLang Twitter account to share their experiences with the revitalization and promotion of African languages. This profile post is about Mahuton Bienvenu Possoupe (@b_mahuton) and what he plans to discuss during his week as host.

I am Mahuton Bienvenu POSSOUPE. Mahuton means “The one who belongs to God” in Fon. Fon is the most spoken national language in Benin.

My parents are from the Ouémé Valley and speak Wéme, a language I can understand well, but cannot speak really well. But as I was born and grew up in Fon communities, I can easily speak and understand Fon as most Fon people.

I am a software developer and e-commerce specialist. In addition, I am a volunteer Mediawiki developer since 2018. Mediawiki is the software that supports wiki projects like Wikipedia. Since 2014, I edit Wikipedia, documenting my country, its culture and its people on Wikipedia. I am a founding member of Beninese Wikimedians User Group and support new contributors from Benin at the starting point of their volunteering journey. In 2018 during a Wikimedia Hackathon in Barcelona, I started a Wikipedia in Fon with the support of people from the Wikimedia Foundation. I am now organizing a Fon community of volunteer contributors in Benin.

When I was about sixteen years-old, I was able to read lectures and write prayers in Fon at church on Sundays. I remembered people telling me after church, “Congratulations, you read it so well”. That experience helped me develop and reinforce my Fon writing and reading skills.

Today, as part of who I am, I want my people to be proud of their language, to seize all opportunities and initiatives to promote it. I believe language is a vector of development.

In Benin, there are more than 25 national languages. Among them, Fon is the most spoken one. It is also spoken in some regions in Nigeria and in Togo. About 4 million people can speak Fon today. My language is almost not at all present on internet. The root cause is that people can speak Fon but really few can read it or write it and those who can, usually have no access to internet technologies so they can’t promote it on the internet.

Some people are ashamed of speaking the Fon language or their mother tongue language generally, as they think they will appear as an illiterate person. In primary school, you can be punished if the teacher see you speaking Fon.

There are 2 most important challenges:

1-Create initiatives to teach Fon speakers how to write and read it and this can start at primary schools. Young students learn to read and write French or English in schools in Benin, so this is also possible with Fon.

2-We need to create technology solutions that can help people to easily write Fon on computers or mobile devices. But there are some initiatives that are rising and maybe it will take some time to fully address those challenges but I keep hoping it will be possible.

Based on the challenges I’ve mentioned above I will be focusing on 3 main areas:

1-Raising awareness about the importance for us as Beninese to promote our national languages and especially the Fon language by using it in everyday communications.
2-Initiatives that promote the Fon language, both online and offline.
3-Technology that can help the Beninese read, write, and speak the Fon language

My main motivation is to give the Fon language more presence on internet with more content written in Fon. I hope one day decision makers in my country will also take actions that will promote the Fon language by: