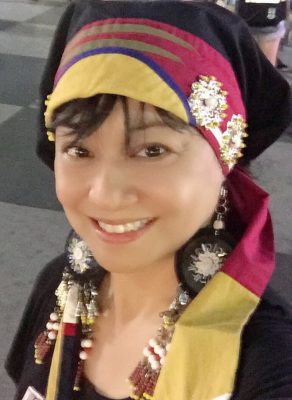 Each week, the upcoming host will answer several questions about their background and will give a brief overview of their language. This Q&A is with Mulihay Talus (@Kau_Jasmine1126) who will provide a sneak preview of what she will be discussing during her week as host.

I am Mulihay Talus of Sakizaya from Hualien. After my mother's death, I was raised by my Amis maternal grandmother and Amis became my mother tongue. In 1990, my father got involved in the status recognition/recertification movement of Sakizaya that made me wonder about ‘Who am I?’ My father passed away in 2006 after falling ill due to his dedication and hard work in the movement. To continue his legacy, I too became involved in the promotion of our language and culture ever since.

More than 10 years ago, on January 17, 2007, Sakizaya was eventually recognized as the 13th indigenous group of Taiwan. Although I have continued on bettering my grasp on the language, there are no opportunities to use this language in my day-to-day environment. Therefore, as much as I wish to improve my language, I can only put it to use during the class that runs for three hours each.

Ever since the Takubuwan Battle, the Sakizaya people were dispersed into the neighboring communities of the Amis. Sakizaya had since then lost its own identity for 120 years, until 2007. However, there remains a void to be filled by the revitalization of its language and tribal culture. I am really happy for this opportunity to become one of the guest hosts and am hoping to introduce celebrations, costumes, folklore, as well as tribal industries of Sakizaya to a global audience.

I work in the media and my job has to do with mass communication about the indigenous culture and language. When a former colleague reached out, I knew I had to take this opportunity to share my language, my culture for more people to know. Without its own language, an ethnic group will die out! Now that Taiwan’s Council of Indigenous Peoples have curated quite some online resources for public access, it’s easy for anyone to study the languages as they wish. Besides weekend classes, I practice Sakizaya with my family as well in the hope to create an environment of speaking the language in daily life and to pass it along to the next generation.