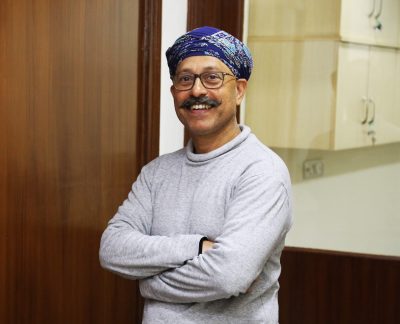 Each week, the upcoming host will answer several questions about their background and will give a brief overview of their language. This Q&A is with Osama Manzar (@OsamaManzar) who will provide a sneak preview of what he will be discussing during his week as host.

In 2002 I co – founded Digital Empowerment Foundation – an organisation established to digitally empower the masses (so far 7.5 million) with a footprint of 600 locations and 9000+ digital foot soldiers across 126 districts in 24 States.  A British Chevening Scholar and an International Visitors Leadership Program Fellow of the US State Department, I am also an author, columnist, impact speaker, angel investor, storyteller, mentor, along with being part of several government and policy committees in India and international organisations working in the areas of Internet, access, digital inclusion and Misinformation.

I have also has co-authored more than five books, including Internet Economy of India and Netchakra: 15 Years of Internet in India. DEF, in fact, has instituted 10 awards for recognising digital innovations for development in South Asia. Travelling to more than 5000 villages across India and 50 countries, I am specialized in advising digital models for underserved communities.

Additionally, I am a Member of Advisory Board for Alliance for Affordable Internet; Member of Media & Information Literacy Experts Network and Member of the Board/Advisory at various organisations such as: Association of Progressive Communication; Global Network Initiative; World Summit Award; Ibtada; Society for Labour & Development; Sahapedia; Down To Earth; Protsahan Santhan; Missing; and Swaraj University.

In India, where there are more than 780 languages, over 220 languages have died in the past 50 years and 197 others are categorized as endangered by UNESCO. Despite India’s cultural, geographical and linguistic diversity, only 22 languages have the official status in India. What is even more disappointing is that India has lost nearly 250 languages in the last half century, and 196 more have been declared endangered by UNESCO. With most of these languages spoken by tribes and lacking a script, it has been particularly difficult to preserve them.

India’s diversity lies in its richness of languages. There is an Indian proverb that goes, “Every two miles the water changes in India, every four miles the speech”.

Unfortunately, several of once thriving tribes in India have fewer than 1,000 members living today. The Indian Toda tribe, for example, is largely dependent on buffalo herding and embroidery for its livelihood. Its members are incredibly skilled artisans known for the red-and-black embroidery on white fabrics that has even earned them a GI (geographical indication) tag. They live sustainable lives, in harmony with nature where all their resources are available. The Toda tribals have their own language, which does not have a script. Over the last century, their numbers have been dwindling. The sharp decline in their population is largely related to the decline in agriculture land, much of which has been lost of afforestation. With their dwindling numbers, their art, craft and traditions are facing a slow death. If not preserved, the day is not far when their unique embroidery, for instance, is lost forever.

Several other tribes, which speak no other language than their mother tongue, and have either no script or aren’t trained to understand their script, will never find way to the Internet, if service and content providers continue to focus on the English speaking populations of the world. Unfortunately, in India, even a large share of government websites are only available in English or Hindi. Only a handful are available in state languages. Other languages are completely missing, pushing the marginalised communities further into marginalisation by disallowing them to access government records and information.

In such an English-dominating virtual world, where technology, too, is largely developed and designed by native English-speaking persons, I want to ensure that the oral or illiterate communities become a part of this growing network.

In the absence of digital tools and the Internet in the past, documentation through text was the only medium of preservation of history, culture, art and even languages. Not everyone was accomplished to write a book or influential enough to publish it. The Internet, too, for most part of its initial years represented only those who were on the top of the pyramid — both in terms of financial capability and English speaking skills. Then came the proliferation of digital tools, allowing history, culture, art and even (scripts of) languages to be photographed and preserved. We now have audio visual formats, which eliminate the need to have a script to document or preserve a language.

There is no denying that with the help of basic digital tools, people can be empowered to tell their own stories, beating long-set information exchange criterion of being able to read and write one or more script. By using the medium of spoken words and audio-visual story-telling, masses are better placed in the current information economy.

With an increasingly high penetration of mobile phones, we at Digital Empowerment Foundation have witnessed people learning to use digital tools to tell their stories. There are “illiterate” people who are using smartphones to become community journalists; who are sharing their folk music on YouTube; who are using WhatsApp to find buyers for their handloom and handicraft; who are using emojis and audio notes to communicate with their loved ones. It is interesting to see how people in rural, remote and tribal locations with no formal education and lack of knowledge of a script are engaging in fluent conversations in real time through audio notes, video calls and a bucket full of emojis to express an entire thought without any letter at all. And so, the written medium of communication is no more the parameter to define literacy.

Knowledge is for all.

And that is what makes it imperative to include the excluded — those who are yet to get online are largely those who form the oral and illiterate society. In order to bring them into the digital world to both produce and consume content on the Internet in their regional languages—thus improving the scope and volume of traditions, cultures, art and language that populate the present day Internet—it is important to not just train them in digital literacy but in media and information literacy (MIL). MIL has the power to ensure that the new users of the Internet do not just become consumers of information; but can consciously and judiciously access, organise, analyse, evaluate and produce information.

It is interesting to note here that while none of the Indian languages make it to the top 10 languages on the Internet as of now, Indian language user base grew at a compound annual growth rate of 41% between 2011 and 2016 to reach 234 million users at the end of 2016, surpassing the English users in India, according to a recently released Google-KPMG report. So what happens to the rest in the next decade? Will they, too, simply vanish from the records like almost 1,500 languages did from the 1971 Census (1961 census had listed 1,652 mother tongues and the next census listed only 108 mother tongues)? In a predominantly oral culture country like India, which is home to thousands of tribal communities and hundreds of languages, how do you preserve languages? How do you document languages that have only been sung in folk songs or narrated in folk stories without a script? How do you document the culture, traditions and history which are embedded in everyday life?

Every time a language dies, we lose a part of who we are. The effects of that language loss are also culturally devastating. Each language is a key that can unlock local knowledge about medicinal secrets, ecological wisdom, weather and climate patterns, spiritual attitudes and artistic and mythological histories. Languages have naturally risen and fallen in prominence throughout history. What makes this different in India as well as throughout the world is the rate at which its happening and the number of languages disappearing. I strongly believe that Digital and technology will help preserve dying languages and can be one of the strongest means to do so.

Connectivity can ensure better access to government schemes, entitlements and rights; digital market linkages can enable tribal communities to exhibit their craft and agricultural produce to the world for an improved livelihood; access to the Internet can keep them updated on government notifications and other relevant information; digital documentation can preserve and showcase their richness for posterity.

A low literacy rate, especially in rural India, has for long kept people devoid of any information. But with the advent of the internet,  there is a possibility that the gap can be bridged.

Gondi, a South-Central Dravidian language in India, is spoken by close to three million people of Gond ethnicity. Although it is the language of Gonds, only a one-fifth can speak the language, putting on the verge of extinction the rich folk literature that survived through marriage songs and narrations till now. There is also certain unwillingness on the part of the younger generation in learning the native language as they mostly migrate to cities looking for better opportunities leaving the age-old livelihood practices. However, pages on social media sites like “Humans of Gondwana” (Facebook) and “Gondwana Events” (YouTube) are trying to give a new lease of life to the culture. Run by locals, these pages are telling the world stories from a communities’ perspective, their day-to-day lives and major Gondi events.