FOKO: Referendum On Constitution And A Failed Coup

Madagascar is going through a turbulent time. After 20 months of regime change the return to constitutional order was anticipated. A heavily disputed referendum on the new constitutional proposal was held on the 17th of November. The election process was marred by irregularities and finally it was overshadowed by a failed coup attempt.

Some bloggers of the Rising Voices grantee FOKO of Madagascar continued to share the news as it happened along with their opinions. 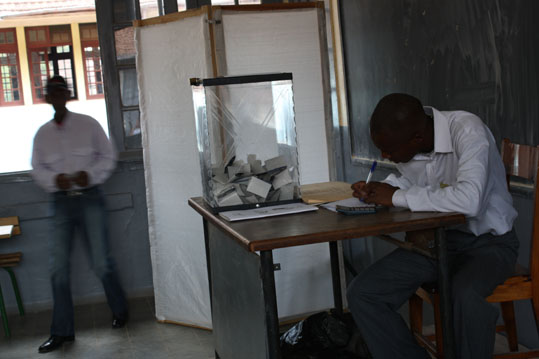 Andry posts about the riots in Antananarivo prior to the referendum which was boycotted by the opposition parties:

Few days ago, the three movements filed an official request before the municipality of Antananarivo and police prefecture to use the MALACAM stadium located in Antanimena. [..]

The prime minister, General Camille Vital, after a meeting with the high officers within the Joint Body of Conception, decided (after municipality’s decision) to ban all the political public events.

A Mazda van which was transporting Indo-Pakistanese children, was vandalized and set on fire. Image courtesy Dadandry

The protesters vandalized cars and attacked shops of foreigners.

“I will never accept and be part of these wild and intellectually poor scenes of looting and public destruction,” reminded Andry.

Ariniaina conducted an online survey and she shared the results:

The first question was: Are you going to vote?

Harinjaka notes that almost 80% of Madagascar citizens have skipped their civic duty and wonders:

“If the result of that vote participation is less than 50 percent, will the international community accept and recognize Madagascar as Democratic country?”