“We are looking for equality, but we are also aiming for equity.” 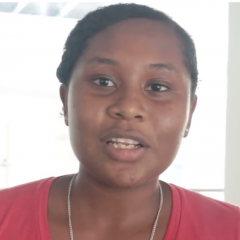 The Reframed Stories Project asks people to respond to dominant themes and issues that appear in news coverage about their communities. These stories are reflections by people who are frequently represented by others in the media. Word clouds are created using the Media Cloud platform, a data analysis tool which examines a collection of media outlets over a specific period of time, allowing participants to analyze and discuss preliminary insights into how they might be represented in the media. The project refrains from making conclusive pronouncements about the data, and instead is a starting point that creates space for discussion about how they can help shape their own media representation through digital media.

Dayana Zamorano is a student at the Universidad Luis Vargas Torres in Esmeraldas, Ecuador. The following is a transcript of the video about Dayana's analysis of the word cloud for the term, “feminismo” (feminism).

What about the word cloud drew your attention most?

I chose to work with the word “feminism” in this workshop. Well, actually, I had to work with this word because I initially wanted to analyze the words “black feminism”, but we could find absolutely nothing about that topic at a local or national level when we conducted the search.

According to the word cloud, how is feminism represented in the media?

How should feminism be represented in the media?

I think that the word “equity” should be present, as I think that word represents feminism a little more. When I conducted the search (in Media Cloud), equality came up, and it is true that we are looking for equality, but we are also aiming for equity.

What words should a word cloud for ‘feminism’ have?

Especially at a local level, I would want the words “black feminism” to be present, and also “empowerment” and “power”.

This is part of a Rising Frames series developed in close collaboration with the organization El Churo based in Quito, Ecuador. They organized a workshop held on May 4, 2018 in Esmeraldas, Ecuador that brought together representatives from various collectives and groups to examine how they or issues they care about are represented in a collection of Ecuadorian media and created stories in response to that representation.

Mónica Bonilla and Belén Febres-Cordero assisted with the transcription and translation, which was edited for clarity and length.