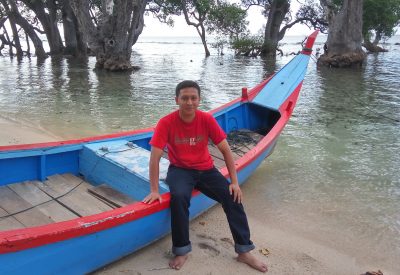 Each week, the upcoming host will answer several questions about their background and give a brief overview of their language. This Q&A is with Nabil Berri (@nabilberri) who will provide a sneak preview of what he will be discussing during his week as host.

Nabil Berri (NB): Hello, my name is Nabil. I live in Banda Aceh, Aceh province, Indonesia. I studied medicine at Syiah Kuala University in Banda Aceh, the provincial capital. Even though my university major is not related to linguistics, I am really interested in the Acehnese language. My language activism started in early 2008 when I initiated Acehnese Wikipedia with Teungku Hasmahdi, Fadli Idris and Andri Humardhani. At that time, I was concerned with the condition of the Acehnese language, which has limited written literature in prose form. Historically, most Acehnese literature consists of poetry.

Currently, I and some other Acehnese language enthusiasts are working on some other projects such as the revival of the Acehnese Jawi script, an online dictionary and localization efforts led by Mozilla. I also administer an Acehnese language learning website called Bahasa Aceh.

Beside these activities, I have contributed to Wikitongues by recording some vernacular languages of Indonesia.

NB: Although Aceh province has a special autonomous status in Indonesia, unfortunately Acehnese language has no official status. Like many other vernacular languages in Indonesia, Acehnese is only learnt by students in elementary and junior high school.

There is also a dearth of publications in Acehnese language. For instance, no newspapers or magazines are published in Acehnese. But fortunately, thanks to the internet, we have some online media for Acehnese language. The first significant achievement is the approval of Acehnese Wikipedia by the Wikimedia Foundation in 2009.

In the broadcasting domain, there is only one radio station (Meugah FM) that uses Acehnese. Indonesian State Radio (RRI) also has a section for Acehnese language news. As for local televison stations, Aceh TV has some news programs and morning talk shows (Kupi Beungoh) conducted in Acehnese, thus promoting the use of the language.

NB: Acehnese language has a long history since it was first written in the 17th century. Its history, literature, development and its current status both online and offline are among many things that I want to share with Rising Voices.

NB: My main motivation is to upgrade the status of Acehnese language from an oral language to a written language. There is very little Acehnese literature in prose until the early 20th century and until now prose books in the language remain few and far between.

The existence of Acehnese in the digital world will increase its prestige among the speakers and encourage Acehnese people to be proud of their native language.

My dream for the future is for Acehnese to be granted official status in Aceh province. With this status, Acehnese would be used extensively in all domains. For example, all official documents would have to be written in Acehnese alongside Indonesian. Acehnese language would be used as a medium of instruction at all education levels from Kindergarten to university. This would promote scholars’ use of Acehnese in their books concerning all kinds of knowledge, including science.