The Mexican indigenous artists who are defying labels and stereotypes 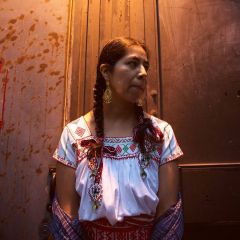 My name is Isela Xospa and I am a freelance illustrator and editor. The graphic design project that I am developing is the result of a personal journey to find ways of asserting my indigenous identity in a contemporary and transnational context. Discovering and embracing my indigenous identity has given me the tools to build new ways of sharing an inner world that is heavily influenced by the culture of the indigenous people living south of Mexico City. 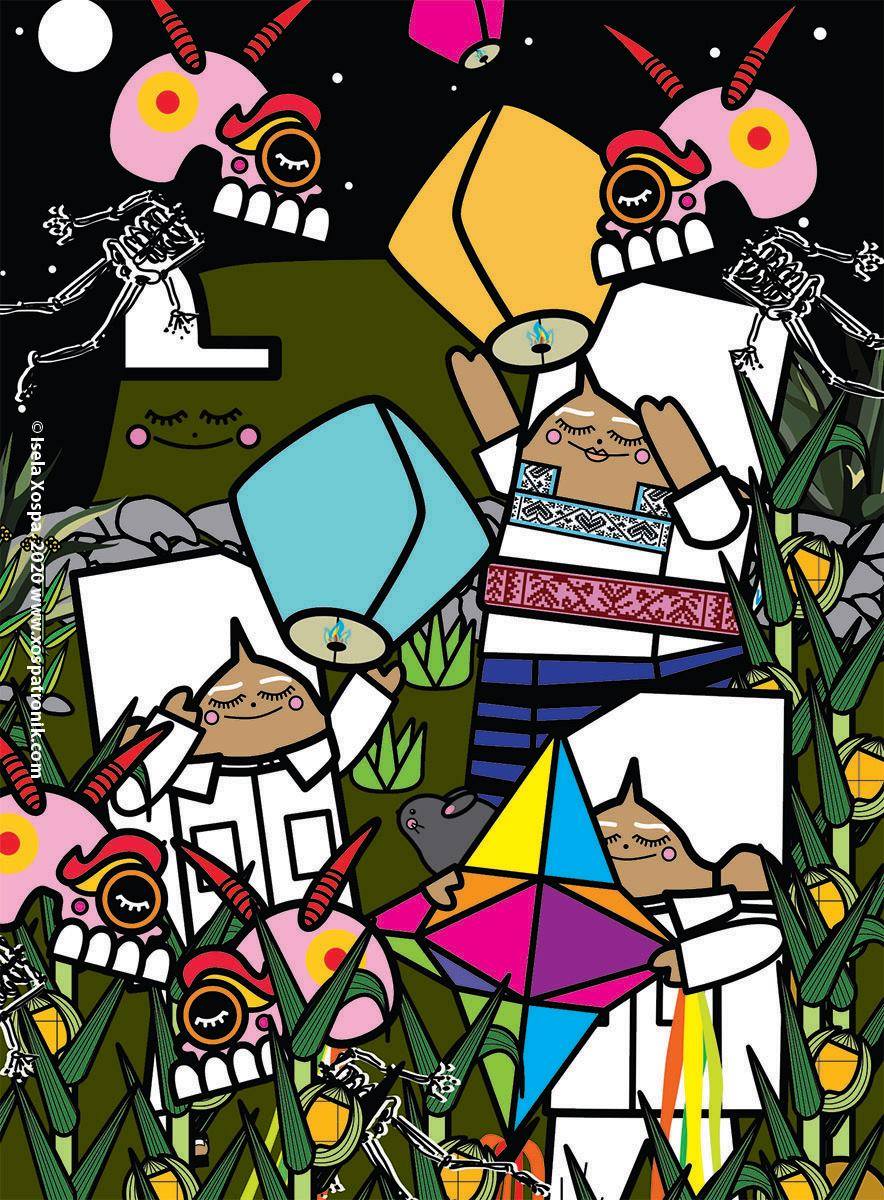 Night of the paper balloons, 2019, by the author, Isela Xospa.

For the International Day of the World’s Indigenous Peoples on August 9, I decided to share the work of young illustrators of indigenous origin and I am sharing them again in this article. I wanted to do this because there are not many illustrators out there who identify as indigenous. The other reason was that, far from trying to stereotype, I believe it is important to publish their work as a provocation that seeks to challenge the imagery and labels assigned to indigenous people and their representations.

We must not waste these opportunities to question the formats and styles that are used to represent indigenous groups in the world of illustration. These should be treated as windows of opportunity to rebel against the imposition of the non-indigenous, to make our political stances known and to put forward suggestions, outcomes and ideas to encourage the creation of new narratives and readings, made by and for the indigenous population.

For us, the International Day of the World's Indigenous Peoples is not a celebration of labels, customs or exoticisms. Instead, it must acknowledge the systematic attempts to erase us and to integrate us into a nation-state project, which has led to the loss of languages, territories, clothing, knowledge, health and opportunities of indigenous peoples.

From the small place that inspired our creativity, some of us with our political views and others with the prevailing need to express ourselves vividly and visually, we will continue to create narratives for children, young people and adults from native populations. We hope that our stories will touch, transform and impact future generations of graphic storytellers who return to, use and embrace their culture.

From our creative spaces, we share with you our visual libraries.

Mitzy Juárez is an illustrator and graphic designer from the Chocholteco Ngiba indigenous tribe in Oaxaca, southern Mexico. She was born and raised in a small, remote town on the plains of the Mixteca region of Oaxaca, home to the area’s most beautiful natural springs. The inspiration for Mitzy's drawings comes from the people, the language and the traditions with which she grew up. Through drawing, she has found a way of preserving the knowledge that she inherited from her community—the knowledge that she carries with her wherever she goes.

The little corn was carried by the wind from the Milpa farms to the city, crossing seas and rivers, plains, roads and mountains! (Gabriel del Río) It's Tchíxa, the little corn!

David Canul is originally from the Mayan territory of Campeche on the Gulf of Mexico. His hybrid work as a professional illustrator ranges from research books, poetry, content for children and even ceramics. He is also involved in organising, managing and promoting children’s and young adult literature festivals in the Yucatán Peninsula.

A post shared by PájaroToj Ilustrador (@pajarotoj.ilustrador) on Mar 5, 2020 at 3:36pm PST

An element that stands out in Griss Romero's work is the jaguar, also known as “tekuani” or “tiger” and is one of the most important identity symbols in the state of Guerrero. Griss finds inspiration in the ancestral roots and culture of the Nahua community in Acatlán. She uses her art as a tool to raise awareness of the indigenous peoples in the state of Guerrero in southwestern Mexico, and to showcase their agricultural beliefs and rituals.

Griss currently has a piece featured in the Poetics of Colour virtual art exhibition and will soon feature in the virtual exhibition “FROM MY WINDOW Longing of an Artist in Quarantine”.

Cuauhtémoc Wetzka is a graphic designer and illustrator who has exhibited works in Argentina, Colombia, Spain, France, Estonia, Poland, China, Canada and the United States. Cuauhtémoc is from the Nahua community of the Sierra de Zongolica located in the central region of the state of Veracruz, which lies along Mexico's Atlantic coast. In 2015, he was awarded first place in the Mexican National Council for Culture and Arts’ 25th Catalogue of Illustrators for Children's and Young Adult Publications. In the same year, he was also a finalist in the Art Contest and Exhibition for Children by Hispanic Artists in Las Vegas, Nevada. He has also spoken at various international conferences and has been recognised for his work on printed posters.

Gilberto Kupyum is from Tlahuitoltepec Mixe, an indigenous community located in Oaxaca's northwest region, an area of fog and forest. In his work, he uses themes such as nature, oral tradition and music, which he captures in various media, for example, painting, screen printing, engraving, lithography and ceramics. His real name is Gilberto Delgado but is called Gil Kupyum or Mish Kupyum by his friends, which means “woodpecker boy” in the Ayuujk language. He identifies with this bird because wood carvings are used in graphic design.

Gilberto Kupyum also works with women and young people from his community. Together they make bags, shirts, notebooks, prints and other products to create a source of community employment.

Valentín Peralta Betanzos belongs to the Mazatec indigenous group and is originally from the town of Eloxochitlán de Flores Magón, one of the 45 municipalities that make up the Cañada region of Oaxaca.

Valentín admits that he is attracted to the contemporary world and incorporates new concepts and materials into his current works while focusing on variety since he believes that art is a language and an expression of all the senses.

MARIA SABINA
A homage to Maria Sabina, a Mazatec woman known as the “priestess of the sacred mushrooms.” This is something I really enjoy doing…when you remember those mountains that are so full of life, the people that surround you, the faces and the gazes…modelled in plasticine.

Victoria Gaspar Teodocio is a Zapotec woman descended from the San Melchor Betaza community in Oaxaca. She is an illustrator who studied Graphic Design at the National Autonomous University of Mexico. Vics uses her illustrations on handmade notebooks and silkscreen prints in different media, and also enjoys working on documentary and portrait photography. The protagonists in Vic's art are women expressing their freedom, passion and love. Her illustrations are a tribute to her mother, grandmothers, and all the women who have had an influence on her life. Vic is part of the mountain group called Dill Yel Nbán, which focuses on promoting the Zapotec language.

Female musicians from the towns of San Melchor Betaza and Villa Hidalgo Yalálag in the Sierra Norte de Oaxaca region. Music from the mountains is identity, inheritance, song, light, strength, happiness, wisdom, memory, dance, it is history embroidered in a huipil, in a skirt that will not cease to flourish in the community.