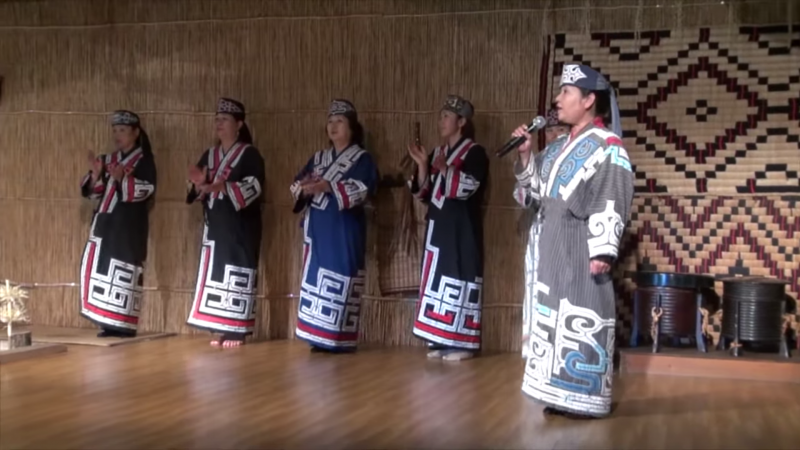 An online “talking dictionary” first launched in 2009 is attempting to preserve and pass on the Ainu language spoken by the indigenous inhabitants of Japan's northeastern island of Hokkaido and Russian island territories to the north. According to UNESCO, there are eight languages in Japan that are critically endangered, and the Ainu language tops the list with the highest degree of endangerment.

The project involves collaboration between Ainu speakers, the Endangered Languages Documentation Programme (ELDP) of School of Oriental and African Studies (SOAS), the Arcadia Trust, and Anna Bugaeva, a linguistics researcher at the Waseda Institute for Advanced Study (WIAS) in Japan. The purpose of the online project, completed in 2009, is not only to help preserve and transmit the Ainu language, but also to provide a safe long-term repository of language materials, to enable people to see what documentation has been created for a language, to encourage international co-operation between researchers, and to provide advice and collaboration for similar projects with other endangered languages around the world.

The Ainu Talking Dictionary preserves and presents conversational Ainu in an online, searchable format. There is also an interface for linguists, and detailed notes about how to use the online resource. 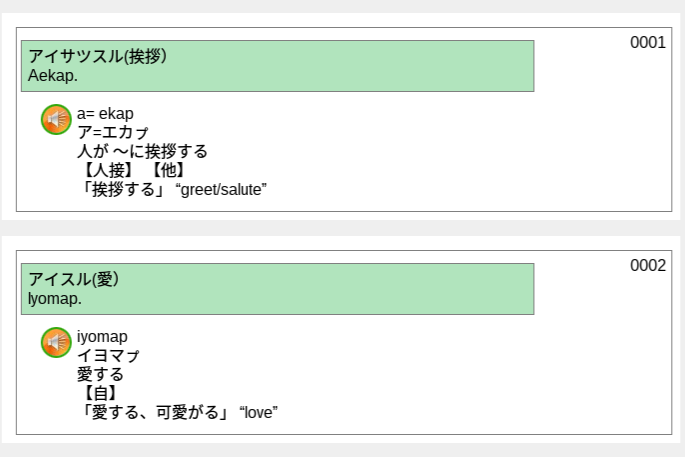 There is an urgent need to preserve the Ainu language. Although numbers are difficult to determine — questions about ethnicity are not included in the Japanese Census — it's estimated that just 25,000 Ainu remain in Japan, with fewer than 10 native speakers of the Ainu language. The Ainu people are the indigenous inhabitants of Hokkaido in northeastern Japan, as well as a string of islands to the north of Japan in Russia's Far East. When Japan decided to colonize Hokkaido and Sakhalin in the 1850's the Ainu were assimilated, placed on reservations, and succumbed to newly introduced diseases.

Today, Ainu culture in Japan mainly lives on at tourist attractions and in folk museums in Hokkaido and Tokyo.

Students try out the mukkuri, a traditional Ainu instrument. “That's a cool name for an instrument!” Students experienced dances, storytelling, and other cultural traditions. ― Asahi Digital.

In the 20th Century Ainu elder and politician Shigeru Kayano, who died in 2006, helped popularize Ainu language culture in Japan in well-known books such as ‘Our Land Was A Forest.’ Kayano also produced a simple Ainu phrasebook that is still in print.

[…] Here's the first volume of the Ainu Conversational Dictionary by Shigeru Kayano. I used to be really into Ainu culture and bought this book. Although I hate Street Fighter-type video games, I did learn the names of the Ainu characters in the Samurai Shodown games by SNK.

The Ainu Talking Dictionary goes beyond Kayano's series of Ainu-Japanese print dictionaries. The talking dictionary is part of research project “Documentation of the Saru Dialect of Ainu” by Anna Bugaeva, a PhD Assistant Professor of Linguistics at the Waseda Institute for Advanced Study (WIAS), Waseda University in Tokyo, Japan.

The project is based on a dictionary compiled by by Kotora Jinbo and Shouzaburo Kanazawa, first published in 1898. Jinbo, a surveyor, had learned Ainu to communicate with indigenous people living Hokkaido. Kanazawa, a linguist, documented words and phrases to create the dictionary that would help transmit the Ainu language into the 21st Century.

The original dictionary by Kotora Jinbo and Shozaburo Kanazawa contained mistakes, misheard words, and even broken phrases (expressions that are inconceivable with original Ainu grammar). We deleted all questionable words and examples, items that were extremely different from Setsu Kurokawa’s audio, and words that Setsu Kurokawa was unfamiliar with. Double entries were basically consolidated to one entry. However, since the video data and audio data were recorded separately, there are cases where the Ainu expression is different in the video and audio. In those cases only, we decided that these were separate expressions, and listed both. In the end, we had 3467 headwords. For particularly rare words, we checked whether they were used in existing dictionaries, and added notes to them.

In addition to the original notations, various information that can aid learning the Ainu language including the colloquial translation, Modernized Roman character transcriptions and katakana [a Japanese phonetic syllabary] transcriptions of the Ainu word, interpretation (glossary) and English translation, etc., are provided. With the help of Setsu Kurokawa, a native speaker of the Saru Dialect of Ainu (Nukibetsu), we were able to upload audio of the Ainu language onto the web. We received many responses and comments from students and researchers regarding these contents. However, we were faced with budgetary restrictions when building the dictionary, and some technical problems remained.

Bugaeva worked with Setsu Kurokawa to record the pronunciation of words and phrases used in the Ainu talking dictionary. Kurokawa, an Ainu elder born in 1926 in Nukibetsu, in southwestern Hokkaido, grew up hearing the language:

When Setsu Kurokawa (born, January 5, 1926) was a child, in the late 1920's, many Ainu families had already stopped speaking Ainu at home. Considering this, Setsu Kurokawa's proficiency in Ainu is relatively high. This can be explained by the fact that she was often taken care of by her grandfather and grandmother. However, since Ainu is not used currently in everyday life, it was difficult to record the spontaneous utterances of the language. In this audio material, the words and expressions are not the spontaneous utterances of Setsu Kurokawa, but instead are audio data initiated based on the Ainugo kaiwa jiten [Ainu conversational dictionary]. In the actual recording process, Anna Bugaeva read the words and expressions in the Ainugo kaiwa jiten, and Setsu Kurokawa repeated these in her own manner. The Ainu language expressions in this audio material are based on the Ainugo kaiwa jiten, and do not completely match Setsu Kurokawa's idiolect.

Bugaeva's finished dictionary was presented to a group of Ainu community members in Tokyo at the Ainu Cultural Center (which itself has online resources dedicated to transmitting the Ainu language) in February 2009. The online tool created in collaboration with Japanese co-editor Shiho Endo and programmer David Nathan (ELAR director, SOAS, University of London) and with an art input of the Ainu community, with web-design by Tamami Kaizawa.