A version of this post was originally published at r12n on Medium.

Learning a language is a challenging endeavor. Digital technologies have been developed over the last several decades to aid the process, ranging from (probably) familiar platforms like Rosetta Stone to immersive virtual environments.

In recent years, the web and mobile app Duolingo has risen to prominence by developing a novel learning model that focuses on maximizing user engagement. While Duolingo is free to use, it is not “open” in the sense that it can broadly invite users to collaborate and contribute. Duolingo learning features come and go, as the company determines what works best for the majority of users and supports financial growth.

Duolingo has an “Incubator” program that allows volunteers to develop new courses. However, the Incubator program is relatively opaque, and the learning content that is developed belongs solely to Duolingo. I asked Duolingo founder Luis van Ahn about course development plans for endangered or indigenous languages, and he replied: “We’ll be working on 4–5 smaller languages this year, but there are over 6,000 languages in the world, so we won’t have the resources to make a big dent any time soon.”

Social entrepreneur Marc Bogonovich, however, sees massive opportunity for language-learning technology that is open — open-source software, open educational resources, and even open business models. Bogonovich argues, “there are many emerging applications, often with very nice interfaces, but they are often unavailable to instructors or university instructors, or they expect to retain more control over the curricula (in design or intellectual property) than is acceptable or reasonable. We really want to empower instructors with excellent problem [design] interfaces for their students.”

To this end, Bogonovich founded Openwords with the intention of producing a free and open-source language learning platform.

Openwords is several things: it is a open-source language-learning app with robust lesson and course development features. It is a social enterprise, or a for-profit business that legally pursues a social mission — not shareholder value — as its highest priority. Finally, if things go according to Bogonovich’s plan, Openwords will be a community of language learners and teachers.

Where does Openwords fit in a technical and commercial language-learning landscape that already contains players like Duolingo and Memrise, and even open-source projects like Anki?

Bogonovich has structured Openwords to be open in multiple senses of the term. The software under development is open-source, as is the supporting infrastructure such as a problem markup language and file formats. He notes, “We’re designing the platform to have an open curriculum, meaning teachers and universities have the tools to create and modify the curricula directly. You won’t ask us for permission to build curricula — the tools we are building will just allow that.”

The user-generated content, such as problems, lessons, and curricula, is also intended to be open and adaptable by other users. Communities of language teachers will be able to share full semesters of content, for example, and individual teachers will be able to adapt and build on others’ lessons to make them better suited for specific learning contexts. Such open educational resources (OER) represent a massive opportunity for language communities with limited resources.

Bogonovich is interested in open technology which empowers people who are outside of Openwords’ formal organizational boundaries. He believes that this openness will encourage the teachers and universities who partner with Openwords to have a deeper stake in its success.

Openwords is also a startup, but a startup founded with clearly-defined open principles. Bogonovich realized from the start that he did not want to found a traditional business, where the bottom line was ultimately just the bottom line:

We are a social enterprise, meaning we have legally protected social and educational goals in addition to financial goals. Openwords is not legally obligated to maximize profit, allowing our organization to better align with the goals of educational institutions. We can maximize revenue (which is different than profit) to maximize our impact. Therefore, we are implementing business models that will sustain and grow open source technology.

An early partner in the Open Business Model Canvas group organized by Creative Commons, Bogonovich has been actively exploring ways to structure Openwords to maximize its social value and mission. The company is currently pursuing B Corp certification, which offers strong legal protections of Openwords’ social mission.

Openwords’ current revenue model is based on providing student tracking and metrics to educational institutional customers, and negotiations are underway with several universities. Bogonivich anticipates finalizing the first such agreements this year: “The path from zero to one client is a qualitative, exploratory, and experimental experience. One to ten clients is hopefully more quantitative. We can continue to engage in more experimentation, but once we’ve accumulated experiences and technologies we begin to generate revenue and scale.”

Openwords is like many open technology projects, in that it leverages a range of previously developed technologies. These include open source programming languages and development platforms. Bogonovich notes that technology standards are particularly important: “Standards like Unicode with their aim of representing most written languages makes something like Openwords possible. I think of Openwords as becoming a higher level element of educational technology infrastructure.” 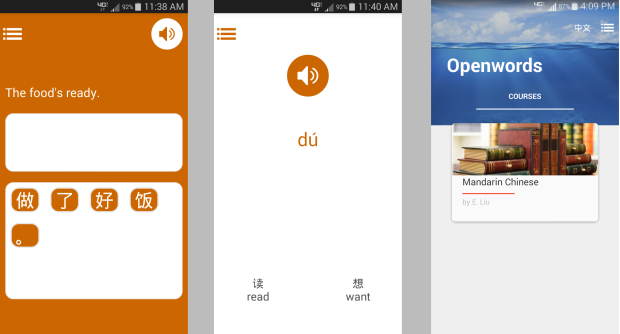 Openwords’ language learning interface should be familiar to users of platforms such as Duolingo or Memrise. A range of problem types are available, including fill-in-the-blank, sentence translation, and listening comprehension. 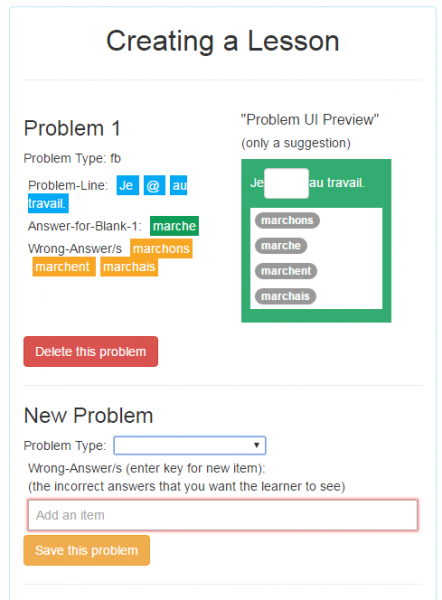 Where Openwords gets particularly exciting, however, is in the opportunities it provides to teachers. To design problems and lessons, teachers can use a graphic user interface (it uses drop-down menus at the moment, but a drag-and-drop interface is planned), or they can write problems in a text editor using a markup language. I’m not sure if this name is official yet, but I like “Openwords Markup Language” or OWML.

OWML is under active development, with the latest focus on how to represent problems containing audio. The general idea, however, is great: keep the educational content in a simple, open, text-based format that can be easily shared, modified, and manipulated. 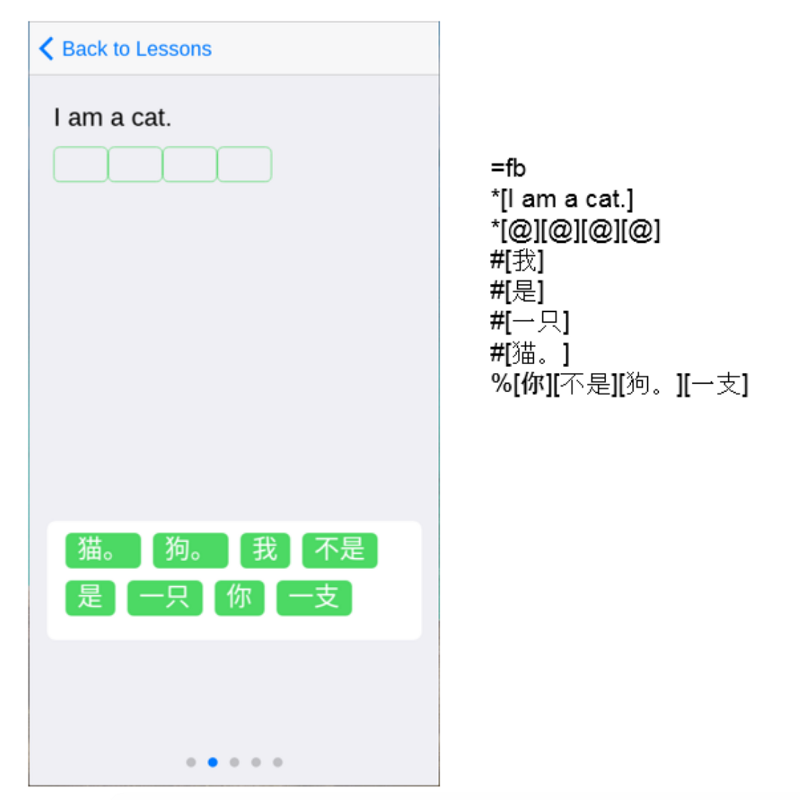 Openwords Markup Language: the code on the right represents the problem on the left. Beautifully simple.

Openwords has strong potential for use in language communities with limited educational resources. The simple fact that the project is open-source, and that its content is not proprietary, should inspire confidence that effort put into the platform will not be squandered. Teachers who create lessons will never be locked out of their lessons due to a change in an interface or business model.

“OER and the open orientation I see as what is needed to reach various languages, even perhaps more than resources — there are a large number of under-resourced languages,” Bogonovich says. He suggests that the openness provided by Openwords will allow smaller language communities to usefully allocate and invest time into language course development. As evidence, he points to the large number of Wikipedias that have been collaboratively and openly developed in different languages over the years.

Bogonovich says that Openwords would be happy to work with members of such language communities: “We’ll work with with groups that perceive the value of OER. And I fully expect that means many different kinds of people and groups. We spent some time discussing why our platform would be valuable for indigenous communities.” 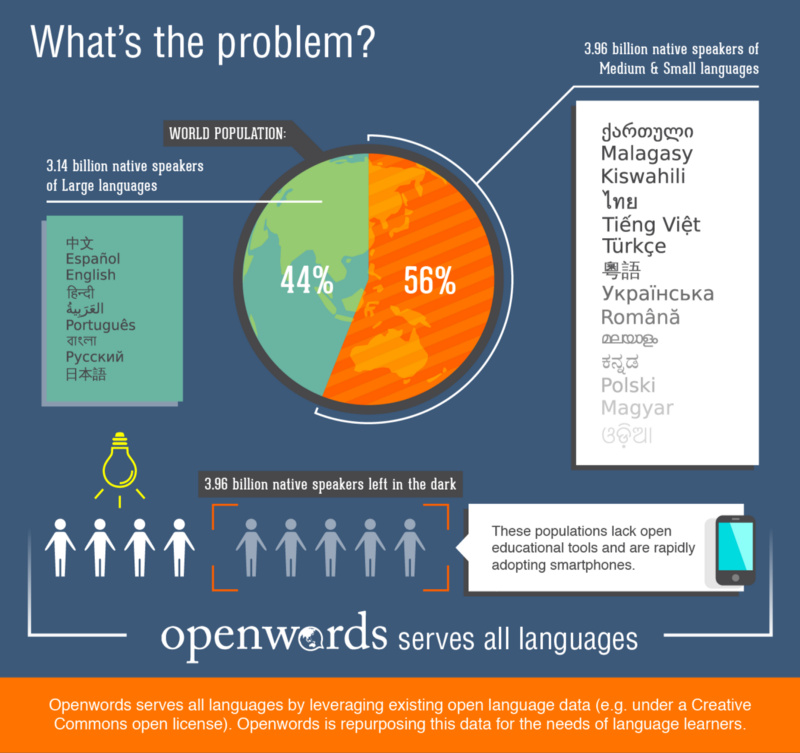 The future of open language learning

In the longer term, Bogonovich envisions Openwords contributing to specific language learning agendas, as well as developing open analytics to provide a broader scientific understanding of the learning process. “After we develop a larger university client base we will begin even deeper technology development, and we will diversify the kinds of learning modules (types of individual problems),” he notes. “We will also explore in much more depth learning patterns, essentially which patterns or problems lead to learning in what segments of learners.”

He further explains, “Because Openwords is a social enterprise, and an open enterprise, what we learn is going to be public domain. Openwords can become a vessel for open science on foreign language learning. We know that other language learning apps do science internally. We’re going to make this public. We hope to leverage our community of users (with proper permissions and anonymity) for researchers who want to study big data and language learning.”