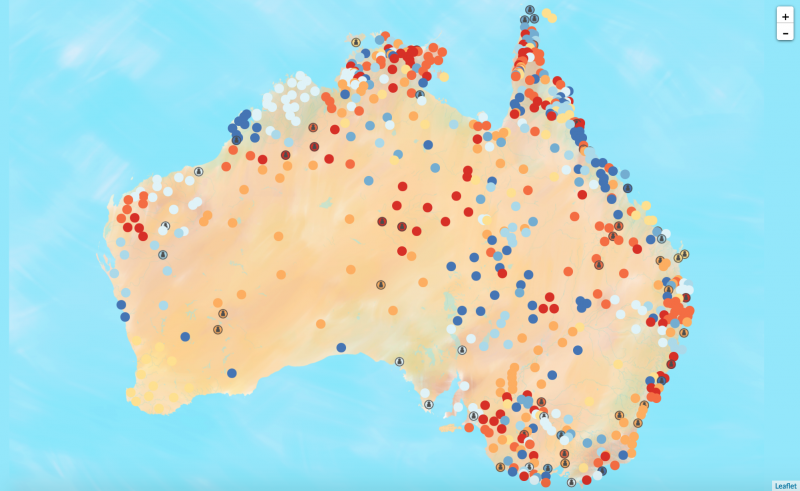 Screenshot of the Gambay map

What better way to visualize the diversity of Australia’s Aboriginal and Torres Strait Islander languages than with a multimedia online map?

“Gambay,” which means “together” in the Butchulla language of the Harvey Bay region in Queensland is a colorful resource map that provides information on more than 780 of the country’s native languages. Each dot on the map represents a different language region, and those dots showing similar colors indicate those languages that may have characteristics in common. Only around 20 of these languages are used on a daily basis by fluent speakers, so being able to establish links between similar languages is an important strategy to establish mutual support. 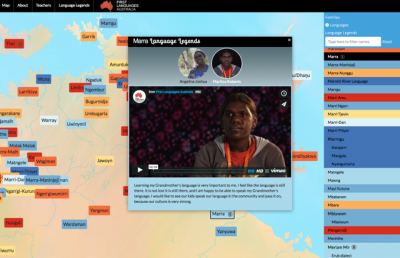 Important contributions were collected from “Language Legends,” who are speakers of Aboriginal and Torres Strait Islander languages working as local advocates. These individuals provided video testimonials outlining the importance of maintaining and revitalizing the languages for current and future generations. These contributions are an ideal way for these local leaders to introduce themselves to their own community as individuals committed to language promotion who can be called on for language advice and support.

Special emphasis was placed on how the language communities choose to represent themselves through the video testimonials, and verifying the location and spelling of the word they use to call their language. According to Melinda Holden of First Languages Australia, this feature is especially relevant as Australian languages were oral languages prior to the settlement, and:

they have been named/spelled various ways over the years by the missionaries, government officials, linguists and other researchers who have worked with the language communities; and by community members themselves.

This map places that decision-making ability back into the hands of community members to decide for themselves on how they are represented.

Another “Language Legend” featured in the map, Bridget, a speaker of the Warrgamay language, writes:

I’m a Djambi in our language. That means old woman. I’m a linguist, I prefer to use the term community linguist or first language linguist. I translate resources from English into our languages, and look at the materials that we need to support language learning. I work a lot with our community. We have a lot to do with our people, talking and agreeing on ways to support language.

I live it and breathe it everyday. Language work is the best thing I can do. Who wants to go out and do other things, when I can be saving our languages?

Additional ways for Aboriginal and Torres Strait Islander communities to contribute and participate in Gambay and control how their culture and language is represented in cyberspace are being developed in conjunction with the “Language Legends” and regional language centers. The content currently displayed on the map could be used in the classroom across key subjects including English, Maths, Science, History, Geography and Civics. The notes it provides are linked to the Australian national curriculum and cover each year grade level.