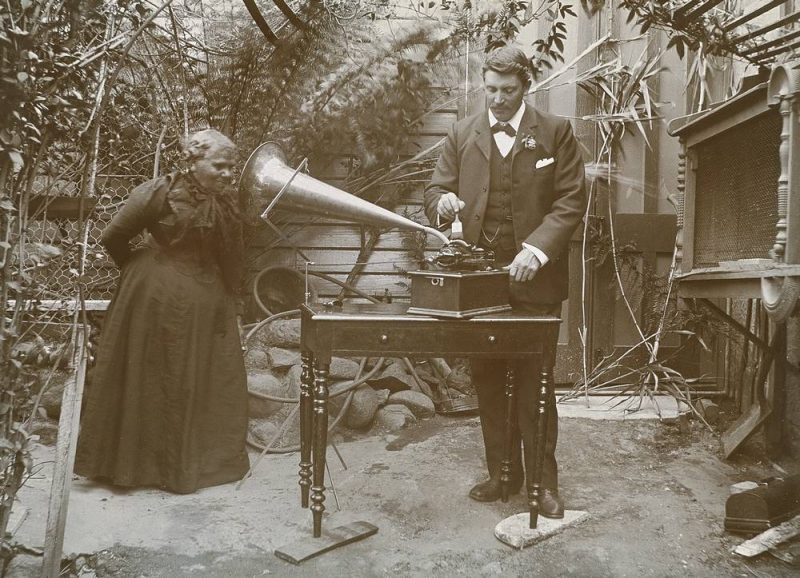 Horace Watson recording the songs of Fanny Cochrane Smith, one of the last fluent speakers of a Tasmanian language, using an Edison phonograph. The original photograph and a recording are at the Tasmanian Museum and Art Gallery. From Wikimedia Commons (Public Domain)

During British colonization of Tasmania which began in the early 1800s, the Aboriginal people living on the island located to the south of Australia’s mainland not only suffered loss of life, but also loss of their languages. Between six and 12 Tasmanian Aboriginal languages are estimated to have disappeared because few families from the different communities survived and very little of the languages were documented. The only documented audio recording was made by Dr. Horace Watson with Fanny Cochrane Smith in 1899 (photo above).

As a way of rebuilding, the different communities came together to form the Tasmanian Aboriginal Community and created a new composite language called palawa kani retrieved from elements from the original languages. palawa kani is lowercase on purpose — the language does not use capital letters in the same way as English.

Since the early 1990s, the Tasmanian Aboriginal Centre (TAC) has been playing a major part in the language revival by teaching and promoting the use of palawa kani in the classroom setting, including in three Aboriginal Child Care centres, as well as with adult education. Camps and workshops are organized on Aboriginal-owned land to provide an immersion experience. One can also hear palawa kani in public settings, such as during the 2004 funeral for Tasmanian Premier Jim Bacon, whose eulogy was given in the Aboriginal language. In popular music, Tasmanian Aboriginal singer Dewayne Everettsmith, a former contestant on Australian Idol, performed songs in palawa kani on his international tour. One of the songs that he performs is called milaythina nika mana mapali (This Land is My Land).

Technology and the internet also play a role in helping new learners of palawa kani access multimedia in the language and practice with others. TAC’s regional offices offer digital dictionaries containing a database of words and their histories, as well as a library of videos and audios. And TAC’s online presence on Facebook and YouTube shares interviews, events, and other activities related to language revitalization. The youth from the Centre also took part in the Mother Language Meme Challenge, which was co-organized by Rising Voices in commemoration of International Mother Language Day. 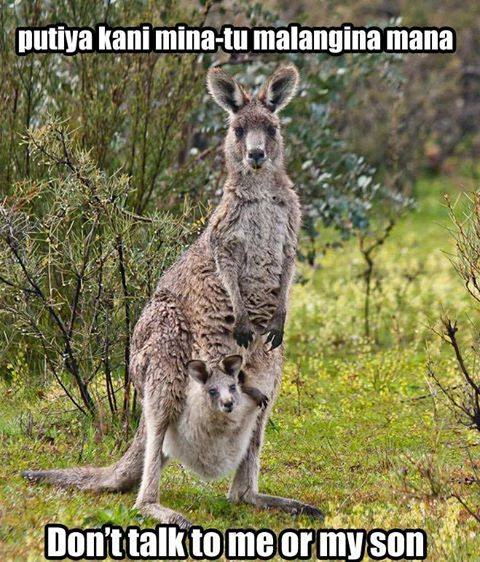 Meme created by youth from the Tasmanian Aboriginal Centre.

One of TAC’s newest project involves helping to adapt the animated show Little J and Big Cuz, which features two young Aboriginal children and their family. Each show focuses on a different Aboriginal language. The TAC’s Language Program auditioned local children, helped translate the script into palawa kani, and collaborated with the production. The process is featured in this promo video provided by TAC. The episode, titled “wurakara/Hopalong,” was aired on National Indigenous Television.

The examples documented above and many more like them are made possible by the technologies available today; however, it also can present a challenge for a community that holds a clear idea of with whom and how the language should be shared online.

Annie Reynolds, coordinator of the palawa kani Language Program at TAC, cautions that this information should not yet be available to the general public, “until Aborigines themselves are familiar and competent with it.“

Because of that community policy, there was disagreement whether or not information about the language should be made available on platforms such as Wikipedia. Reynolds said in an interview with Rising Voices:

We caution people against the Wikipedia page which claims to present information on palawa kani. This page is completely unauthorised and most of the information on it is incorrect. Some of the information has been copied from materials produced by the palawa kani program and distributed throughout the Aboriginal community. No permission was ever sought from us to reproduce any of that material. The Tasmanian Aboriginal Centre contacted Wikipedia’s legal department to have the page removed, but were unsuccessful.

This disagreement was highlighted in an article on The Verge, which explored the complexity of this issue of intellectual property on the internet, especially as it applies to Indigenous and Aboriginal communities.

Despite these challenges, it is clear that the TAC sees the enormous potential of the internet and digital technologies to engage community members of all ages through the various channels available. Reynolds added:

The presentation of palawa kani online is to us an opportunity to showcase and promote the language sharing information about the language which the Aboriginal community chooses to share. Most of the online and social media use of palawa kani is in written form. The overall aim of the revival of palawa kani, however, is to have Aborigines speaking our language again, in family and community life. So the focus of our activities is mainly on teaching and encouraging Aborigines of all ages to actually speak it to each other in real life.