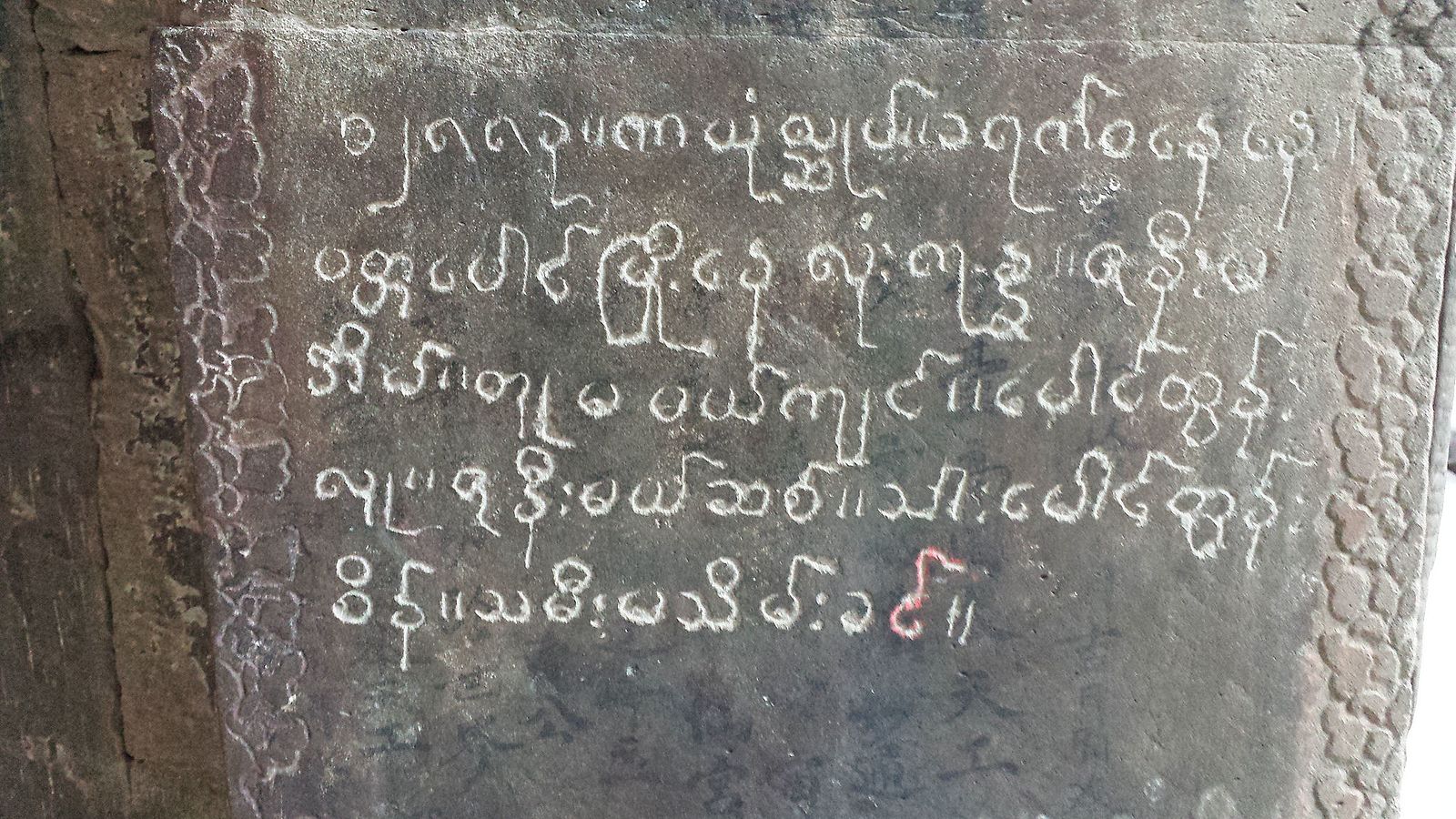 Ancient Myanmar script at the entrance of a temple. Photo from Wikimedia Commons. CC-BY-SA-4.0

On 1 October 2019, Myanmar hopes to begin its migration from its use of the nationally developed Zawgyi computer font to the adoption of a unified system that conforms to the international standard called Unicode.

Major stakeholders such as mobile service providers, media and content producers, civil society organizations, and developers from the tech community have been told by the government to prepare measures for the adoption of the Unicode. All government ministries have already fully migrated to Unicode in April 2019.

Despite the convenience of using the popular local Zawgyi font, it is not compatible with new information technologies.

With less than a month left before the scheduled migration date, more and more ordinary users are starting to change the settings of their digital devices by installing new Myanmar Unicode keyboards. On Facebook, there are groups such as Myanmar Unicode Area and Myanmar Unicode Font Users; and pages that include Unicode and Myanmar Unicode Migration, where users are actively discussing their experience and the challenges they encounter in migrating to a new font.

A brief history of computer fonts in Myanmar

Myanmar was slapped with international sanctions during the rule of the junta which grabbed power in the early 1960s and lasted for more than five decades. Under such isolation, it was not surprising to see a local font system like Zawgyi invented to easily accommodate the need for computer communication in Myanmar.

During the early 2000s, the earlier versions of Myanmar fonts were difficult to use and learn, which explains why they were mainly activated in office settings. Installing Myanmar characters on computers also required specialized technical skills since the earlier versions of Windows and Macintosh operating systems did not support the Myanmar language.

In 2005, a Myanmar Unicode Font called Myanmar1 was introduced by Myanmar Unicode and NLP Research Centre, but it was not fully developed. Improved and updated versions of this font were released the following years. At the same time, a partially Unicode compliant Myazedi font was available to read Myanmar text on the internet. However, it was patented by its developer which made it inaccessible to the wider public.

When the Zawgyi keyboard and font was invented by Myanmar developers in 2006, it made use of the visual typing and encoding method as one would write it on paper, rather than using logical linguistics and computer encoding conventions of Unicode. For many users, visual typing order was relatively easier to learn compared to earlier fonts.

Under international sanctions, native Myanmar language support in Windows computers was not available. The easiest fix was to manually install the free Zawgyi fonts and keyboards.

This coincided with the rising popularity of internet cafes in urban areas around the late 2000s when more and more ordinary people could communicate in Myanmar using Google Talk and learn to type faster and better with Zawgyi. At the same time, blogging on Google Blogspot became a popular activity with many writers publishing content using Zawgyi. When Facebook became popular in 2010, Zawgyi was naturally chosen to communicate.

After the democratic transition in 2010, Myanmar became the newest opportunity for the tech market. This was followed by a huge drop in SIM card prices which caused the sudden boom in mobile phone users starting around 2013-14.

When a fully functioning Unicode Myanmar text was to be supported in Windows and MacOS in 2011, many users were still reverting back to Zawgyi font and keyboard on their computers as by that time Zawgyi was already the most accepted Myanmar font by the population.

Since 2013, earlier Android OS versions had built-in native Unicode font to read Myanmar texts, but they lack a Myanmar keyboard. Thus, Zawgyi still remained a popular fix. Local mobile phone shops installed Zawgyi fonts and keyboards on new phones as part of their services to a vast majority of the population during the mobile phone boom in 2014. Meanwhile, some of the Android phones produced by China for the Myanmar market installed Zawgyi as the main font to supply popular demand.

As there were no native keyboards to type Myanmar Unicode in the beginning for both Android and iPhones, many local developers have produced a variety of popular Zawgyi keyboards to install on them.

For many users, having to adapt two different fonts system that are not compatible with each other on an everyday basis is a big burden. Unless one is a tech-savvy person who is able to switch fonts, ordinary users are automatically excluded from accessing content written in one font or the other (i.e. Unicode users cannot correctly see a large amount of Zawgyi contents or messages and vice versa). Therefore, for most users using just one font, in most cases Zawgyi, is the easiest way to fit into society by being able to communicate in the correct font with everyone. The tech community in Myanmar dubbed this situation as the civil war between Myanmar fonts.

One of the most apparent examples of font rendering problem is Myanmar Wikipedia, where all articles are written in Unicode for long term benefit. That means a large majority of the population is unable to read Wikipedia in their first language. 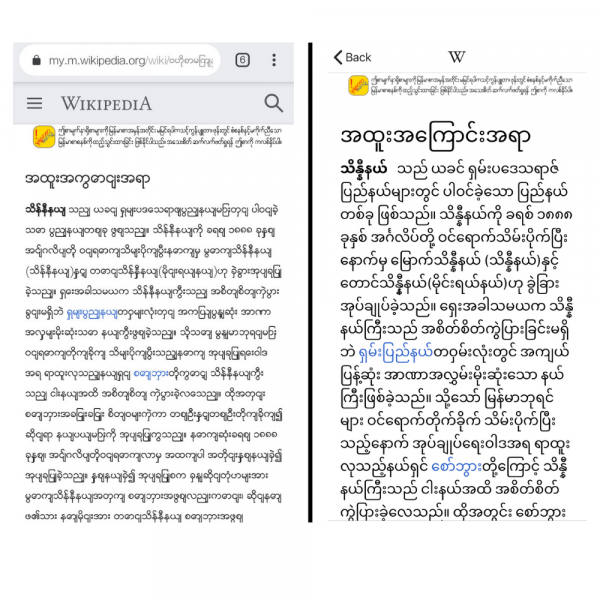 An example of a Wikipedia Article in Myanmar. Left is on a Zawgyi phone where the article text was rendered incorrectly, compared to the right with correct texts on a Unicode supported phone. Screenshots by the author.

Although Zawgyi was based on Unicode's code points, it does not completely conform to the Unicode's standardization for Myanmar script. It also disregarded and bypassed the code points reserved for ethnic languages. [Read the detailed explanation of the problem of Zawgyi's encoding method here].

The technical problem with Zawgyi's encoding method (i.e. encoding in visual order), at first glance, is that alphanumerical sorting will not make sense as vowels are written first instead of consonants most of the time. That means searching and indexing for search engines would never bring accurate results in Zawgyi.

The next problem for such a flawed system is an incompatibility with machine learning. For such messy information storage, it was nearly impossible for computer programs to make sense of its encoding order.

Lack of AI (artificial intelligence) for the language means many language services such as text recognition, text voice reading, spellcheck, and machine translation cannot be developed.

A lot of Burmese contents were proliferating on the internet. But, as you know, data [Zawgyi] was messy without any systematic order and structure because most of them were not correctly encoded. The government began to realize the importance of Unicode when they tried to change to E-Government system. Every IT project developed in Myanmar always faced that issue between Zawgyi and Unicode. They had to invest more time to solve that language problem. And developers as well. They want to end this war.

What social benefits does Unicode bring?

The most apparent benefit of standard character encoding in the local language is that many institutions that store a large amount of information in Myanmar will be able to overcome the burden of cleaning up the messy database of Zawgyi and speed up the computer-assisted information processing.

In addition, effective implementation of the e-government system will become possible with a unified and standard language encoding, and data storage and access.

For years, the tech civil society has been asking the government about Unicode adoption during digital rights forums to create a more socially inclusive internet environment.

In addition, Unicode will improve natural language processing and enable features such as text to voice reading and voice typing, so that people with disability can have better access to computer communication with the Myanmar language.

One of the reasons for the resistance to shifting to a new font system comes from the perception that Unicode keyboard would take a long time to relearn to type in a new keyboard.

The most challenging aspect of the migration is that a large volume of Myanmar information and data have been stored on the internet in Zawgyi. Also, a majority of Myanmar social media content are all produced in Zawgyi. An abrupt migration overnight would cause chaos, and therefore, it needs step by step adoption of a new system with a lot of technical help.

Tech companies have already signified support for the Unicode migration efforts. For example, Facebook said it will help in the shift from Zawgyi to Unicode by auto converting between two fonts so that users can see each other texts without noticing the difference. Myanmar's influential mobile phones provider Huawei said it will set up a hotline in support of the migration. Telecommunication service providers like Telenor also announced, as per government instruction, that they will be switching to Unicode effective 1 October. Myanmar Computer Federation has also tapped the help of celebrities and influencers to become Unicode ambassadors and teach the public about the migration. It has also established a Unicode Migration website, hotline and Facebook page.

Earlier in August, Myanmar press, media, and content producers were also instructed to switch to Unicode.

Now that the government is fully supporting the adoption of Unicode after many years of advocacy by the tech sector, public education will be the next challenge in mobilizing the whole nation to become unified under a single digital font system.