Harassment, gender violence, and racism in response to activism in Guatemala 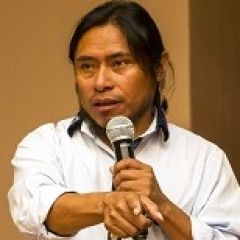 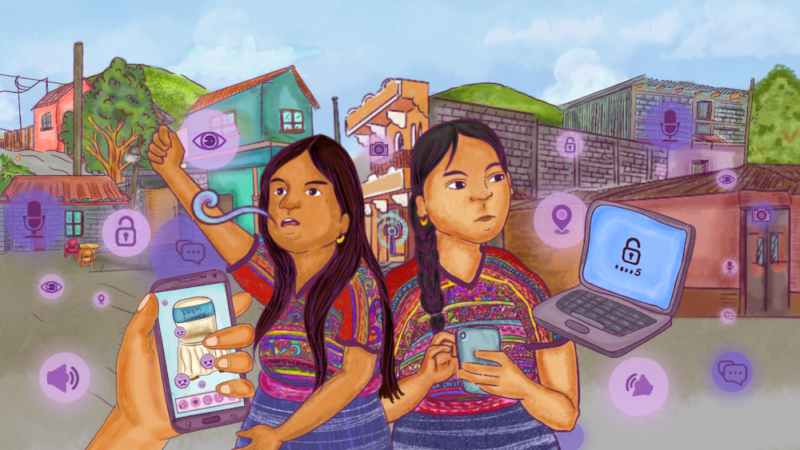 A version of this article is also available in the Maya Kaqchikel language.

By María Alvarez, based on the case study “How much do two Kaqchikel women leaders who have suffered harassment, intimidation and threats on social media know about digital security?” by Miguel Ángel Oxlaj

We seek to support and share based on friendship and sisterhood, we share various forms of self-care and collective care against harassment and gender violence. –  (Saqb’ix)

“Kaqchikel is a language spoken by the Kaqchikel population in west-central Guatemala. It is part of the Quiche group of languages, which in turn is part of the Mayan linguistic family. With approximately half a million speakers, it is one of the most important Mayan languages in Guatemala.” — Wikipedia

Language status: 6b (Threatened). Recognized language (2003, Law of National Languages, Decree 19). The language is used for face-to-face communication within all generations, but it is losing users. — EGIDS scale, Ethnologue

Saqb’ix and Xaxlej Q’os (their names in Kaqchikel) are two Kaqchikel Mayan women from Chi Xot, Guatemala. As young activists and human rights defenders, the two have faced the violence that arises from online and offline racism and machismo. Based on their experiences, the two share reflections that provide ways to think about digital security, related to collective care, sorority and the linguistic rights of Indigenous peoples.

In the study  “How much do two Kaqchikel women leaders who have suffered harassment, intimidation and threats on social media know about digital security?” Miguel Ángel Oxlaj, an activist from the same community, discusses with each of them possible paths towards a safer future for activists. For him, talking about digital security from community contexts is a recent and necessary issue because it is part of the digital rights of all the peoples of the world.

The Kaqchikel Mayan in Guatemala

Before discussing the reflections on digital security and the Kaqchikel Mayan language, it is necessary to understand the context for the struggle of the two women. As Miguel Ángel explains, Chi Xot (San Juan Comalapa) is one of the 47 municipalities in Guatemala where the language is spoken, and within which 97,22 percent of people self-identify as Kaqchikel Mayan. In Guatemala, they are the original people with the most direct contact with colonization since 1524: the three capitals that the country has had have been founded in Kaqchikel Mayan territory. Miguel Ángel comments that:

“This has allowed (the Kaqchikel Mayan people) on the one hand, to have some access to basic services and work-related facilities and, particularly, some access to the internet; but, on the other hand, this has made them one of the peoples of Mayan descent who are clearly losing their cultural identity to the dominant culture, and especially losing their language to Spanish.”

According to the study, in the departments of Chimaltenango and Sololá, where most of the Kaqchikel Mayan people are located, internet access in 2017 was at 12.84 and 7.87 percent, respectively, and internet broadband at 2.05 and 1.2 percent. In the departments of Guatemala and Sacatepéquez, which are also part of the Kaqchikel territory, the Internet access is higher: 56.06 and 27.77 percent, respectively. Although the coverage has improved recently (and even more so during the pandemic, as Miguel Ángel attests from his experience), the gap tied to poverty, especially extreme poverty, continues to limit access due to connection costs.

It is in this scenario that the two Kaqchikel Mayan women between the ages of 25 and 28 have followed on the path of activism through the arts and by teaching their language. Currently they are also using digital tools to achieve their ends. Saqb’ix is ​​a Kaqchikel Mayan teacher, part of the Xamanil.com project, the Kaqchikel Language Learning School, and Yolitia, the Indo-American Language Center. She is also a student and teacher at the Chi Xot Kaqchikel Maya University, and an online Indigenous language activist supporting Wikiwuj, a Wikipedia in Maya Kaqchikel. Xaxlej Q’os is an internationally renowed Kaqchikel Mayan singer-songwriter and social activist. During her tours of Europe, Latin America and the United States, she has made visible the struggles of the native peoples, the fight against racism and, particularly, the struggles of Indigenous women for a future when their territories, their language, and their right to autonomy and a dignified life free of violence are respected.

Unfortunately, their questions and approach to digital safety are also informed by experiences of digital violence, in which both declare having received more than one form of harassment and gender violence and racism in response to their activism. Miguel Ángel states that these are:

Degrading and disgusting messages that, in public networks or private contexts, not only profoundly hurt their dignity as human and women, but also objectify them, degrade them and direct all their hatred towards their condition as women, instead of discussing with arguments their disagreements with their political positions.

Although each has her own story, both share situations of threats and intimidation from which strategies have been developed towards a safer use of technologies.

On March 12, 2021, the president of Guatemala, Alejandro Giammattei, was about to arrive at the Simajuleu de Chi Xot village to inaugurate the construction of a highway between the nearest municipalities. It was known that the primary reason for the construction was not the well-being of the communities, but open-pit mining exploration and exploitation projects in the region. Therefore, the activist Saqb’ix, together with other colleagues, put up protest signs in the area and placed a sign with the Giammattei Eleq’on (Thief Giammattei) inscription on the chair where the president would sit. The local media published the information on their social networks and it immediately went viral.

A week later, other activists replicated the scene in various parts of Guatemala City with a performance: a plastic chair with a blue cover and the Giammattei Eleq’on inscription. Along with the performance, various displays of support were replicated in the digital space, but there were also messages of ridicule, intimidation, and strong threats against the activist, all marked by racist, classist, and sexist discourses. Saqb’ix was forced to take shelter for a few days and take precautions on her social media.

the construction of the road goes on and it becomes increasingly controversial while Saqb’ix continues to lead the organizations that are monitoring this process. Now they have obtained the support of three deputies, but the Municipal Mayor, as well as the local authorities of the communities, are considering this monitoring an obstacle against the construction of the highway and against ‘development.’ In all of this, Saqb’ix, along with her colleagues, remains in a risky situation.

On June 10, 2020, Xaxlej Q’os received intimidating direct messages on her Twitter account after she had made statements against structural racism in Guatemala. It was not the first time, but this time she decided to publicly denounce on her account the threat she had received against her. She also filed a complaint with the Public Ministry, but did not receive any response. “I feared for my life and decided to report it. Unfortunately, because in the country’s legal system this is not established as a criminal offense, even if you bring the evidence, the complaint is not taken into account,” explains Xaxlej Q’os. On social networks, her statement also went viral and generated a similar response: support and solidarity on the one hand, violence and harassment on the other.

Digital security from the community

Recognizing these experiences, what security measures are digital activists taking to protect their personal lives? They both use Signal and Tor for sensitive messaging. However, more than just focusing on the digital tools, both view digital security as a strategy. Saqb’ix defines it as “a series of practices and tools to protect user privacy,” while Xaxlej Q’os explains it as “healthy habits and ways to protect our identity and sensitive data on the internet.” Some of these, they explain, involve not posting updates or images in real time, deactivating GPS, changing the public username, or temporarily decreasing the digital activity.

The two women learned about digital security through collective spaces, such as self-care circles that they organize among friends and colleagues from different towns. Saqb’ix learnt about it in a workshop which addressed digital security with suggestions to take precautions on the internet, which she later further discussed within her circle of friends. Xaxlej Q’os learned about it during her participation in a group of young women who shared ideas and forms of self-protection. She says during the interview: “We seek to support and share based on our friendship and sisterhood, we share various forms of self-care and collective care, against harassment and gender violence.”

Digital security, a linguistic right to care for life

For these activists, the importance of digital security is a matter of caring for life. In the words of Saqb’ix, “our lives have been digitized and they are closely linked with our physical security.” For Xaxlej Q’os, “the extent to which we take precautions in digital environments ensures our personal safety.”

Both activists identify a clear problem of access to this information, particularly for Indigenous peoples. Both consider it a luxury which should be as available as the technologies. In addition, Saqb’ix highlights the importance of accessing it using the different languages ​​of the peoples: “Not so much so that people understand — because the majority of Kaqchikel Mayan users with access to the internet and technologies already understand Spanish very well — but because it is their linguistic right to access it in their language.” In other words, access to this information in Kaqchikel Maya, as in the other Indigenous languages ​​of Guatemala and the world, is not only a digital right but also a human right.

Based on this study and listening to the voices of Saqb’ix and Xaxlej Q’os, Miguel Ángel points out that it is necessary to make visible how the dissemination of information on digital security and secure technologies is a very important issue in Guatemala, especially for the Indigenous peoples. “Carrying out this type of study is the first step in order to be aware of the dangers in the digital context, but it is not enough,” he explains. And he shares the following recommendations for future action:

●  Share information so that more people know their digital rights, as well as the risks of browsing the internet. This can be done in different ways: talks, workshops, infographics, radio spots, short explanatory videos, among others.

●  Disseminate and/or share in the Indigenous languages ​​of the peoples. This not only ensures that the information reaches more people, but also asserts the linguistic rights of the peoples.

The testimonies from Chi Xot, Guatemala, tell the experiences of two Kaqchikel Mayan women who have made social networks a tool for activism. They also discuss the different types of violence inside and outside of the virtual world, and the strategies for digital security from and for Indigenous peoples, strategies that, as they said, must come from the right to formulate them in their diverse languages.