This page presents a summary of the Vikipetã, Wikipedia in Guaraní case study. For the full report, click here. We invite you to post on the discussion page your comments, observations or suggestions about the site content. 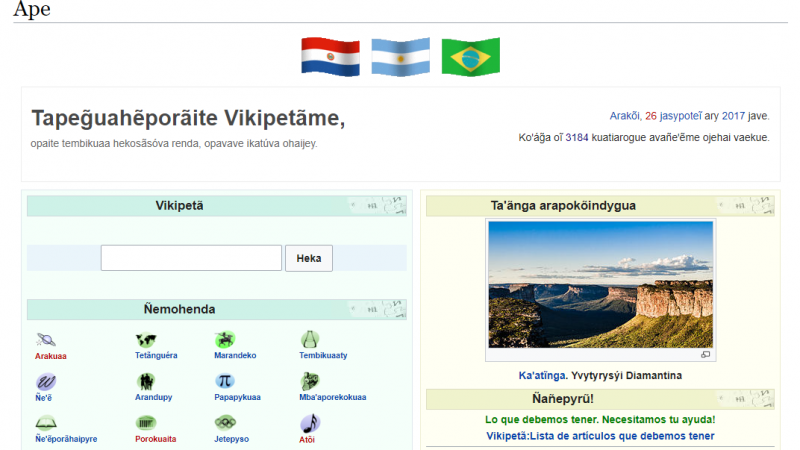 Homepage of Vikipetã, the version of Wikipedia in Guaraní.

Vikipetã is the Guaraní version of the Wikipedia encyclopedia (which is available in 291 different languages). Vikipetâ started in 2005 and currently has 3,091 articles on Guaraní culture and other topics of wide interest.

Guaraní (avañe'ẽ, in Guaraní) is part of the Tupí-Guaraní language family and is spoken by approximately eight million people in the Southern Cone of America. It is one of the two official languages in Paraguay according to the 1992 Constitution. Guaraní is also spoken in some of the territories of neighboring countries, such as the northeast of Argentina and Bolivia.

It is the native language of the Guaraní people, the native peoples of this area, but in its modern variant, whose standard is represented by the Paraguayan Guaraní, it has a wide use among non-indigenous people.

The Guaraní version of Wikipedia was officially created on November 13, 2005 by an anonymous user (with an IP address from the United Kingdom). This was before the Wikimedia Foundation launched new policies for creating a new linguistic version as an incubator project or official project.

However, it was not until December 2007 when significant additions were made to the site, many of which were possible thanks to the collaboration between David Galeano Olivera in Paraguay and Šarūnas Simkusun, an Wikipedia editor based in Lithuania. David Galeano Olivera is a professor, writer, linguist and president-founder of Centro de Ateneo de Lengua y Cultura Guaraní (the Guaraní Language and Culture Center). This non-profit organization was founded in 1985 with the aim of promoting and sharing the Guaraní language and culture. Its main activities include research, training and publishing.

At the beginning, the only contributor of Vikipetâ was Sarunas Simkus (who, at that time, was 17 years old), who posted articles submitted by Galeano. Currently, Vikipetâ has additional editors.

I usually assign to my students readings or research about biographies of outstanding personalities from Paraguay or abroad, or on topics of literature, history or geography. The result is very good because the students, by using Vikipetâ, have the information at hand and can access it fast. But the most important thing is that it is entirely in Guaraní. Another significant fact worth noting is the amazement of some students to discover that Wikipedia has a version in Guaraní language. (David Galeano)

The profile of the Vikipetã editors

Despite the fact that, in Paraguay, 90% of the inhabitants know Guaraní, their contribution on Vikipetâ is low. Vikipetã editors are mostly people from other countries and with another mother tongue. Out of 20 active editors, there is only one native user and two have advanced knowledge of Guaraní language. Likewise, only two users contribute with 63.3% of the total content. Graph 1 shows this statistics. 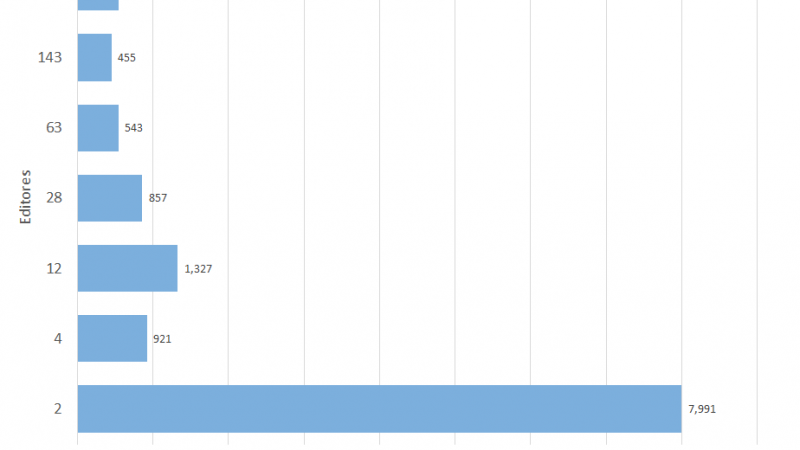 Graph 1. Contributions by the Vikipetã editors.

1. The participation of native Guaraní speakers is very low (although only 5% of Paraguay's population is indigenous). One of the reasons is the situation of poverty and marginalization in which these populations live. Thus, their participation in an Internet project may not be their priority. So, this issue of participation represents both a short and long-term challenge.

2. There are differences between the Guaraní dialects spoken in Paraguay and in parts of Brazil, Bolivia and Argentina. Although the speakers of these variations can understand each other, there are differences in the words used; also, since Vikipetã is written mainly in Paraguayan Guaraní, the number of editors can be limited.

3. Some users consider that the requirements for editing and marking of Wiki code are difficult to follow and a hindrance to their access to the page editing.

4. Quoting references is another important feature of Wikipedia. This site is not a place for expressing the opinions or personal views of the editors. All articles must contain references to other websites, newspaper articles, books or other third-party sources. The material of the primary source in Guaraní is scarcer than in other languages.

5. The number of articles in Guaraní is lower than the number of articles written in Spanish. It is estimated that more than 50% of the Paraguayans who speak Guaraní can also speak Spanish; given also the fact that there is more information available in Spanish, many students and educators choose to access Wikipedia in Spanish as the main reference.

Editors Galeano and Simkus (mentoring model) have allowed Wikipedia in Guarani to be an active and official project, while undertaking other initiatives to bring the contents of Vikipetã to contexts where there is no connectivity (e.g.,Kiwix).