This page presents a summary of the case study: Wikipidiya, Wikipedia in Aymara. For the full report, click here. We invite you to post your comments, observations or suggestions about the content on the discussion page.

Wikipidiya, ¡Jallallt'atapxtawa!, home page of the Wikipedia in Aymara project.

Wikipidiya, or Wikipedia in Aymara, is the Aymara version of Wikipedia and it is the fourth in terms of the number of articles on the largest encyclopedia in Latin American languages.

The Aymara language (also called Aymar aru, or jaqi aru, in Aymara) is part of the Jaqi linguistic family, which includes two other languages: the Kawki (which is considered to be extinct), and the Jaqari (still spoken in some mountain provinces of Lima, Peru).

Although the Aymara community is politically divided by the border between Peru and Bolivia (and also Chile and Argentina), it is unique in both language and culture. The dialectal and cultural differences are minimal. It currently has about 2,200,000 speakers who reside in Bolivia and Peru. It is also spoken in Chile and Argentina.

History of the Wikipedia in Aymara

Wikipidiya was launched on December 1, 2003 under the Aymara code ISO1-ay.  The first entry was “Nayriri uñstawi” (‘main entrance’, in Spanish) which became the home page of the project. In June 2005, the project was named Wikipidiya, a phonetic derivative of Wikipedia in Aymara.

The first article was Piruw (‘Perú’, in Aymara), followed by Ludovico Bertonio, Titiqaqa, Aymaranaka, among others. To date, most of the articles refer to places in Peru and Bolivia, as well as current figures from both countries, and in some cases translations of current issues. For example, it is possible to read the biography of Barack Obama or Mauricio Macri in Aymara. Also, in 2006, the Wiktionary in Aymara project was created. 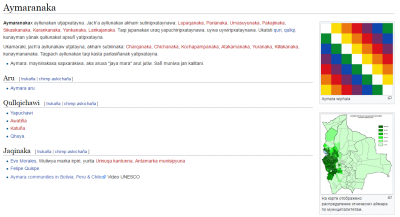 The Aymara language has a standardized grammar that allowed many users to contribute to the development of the Wikipidiya content, and to make it an official project.

The majority of articles were created between June 2010 and October 2011, with 122 new articles following the incorporation of the Aymara-speaking users part of the Jaqi Aru organization.

Jaqi Aru is a group established by the Aymara people who live in El Alto, Bolivia. Jaqi Aru means “the voice of the people” in Aymara. It is a collective dedicated to promoting the use of the Aymara language on the Internet. 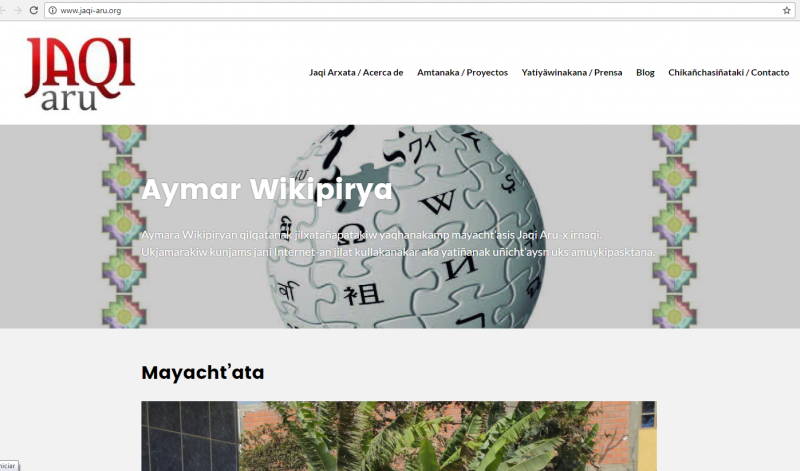 In order to start a Wikimedia project in indigenous languages, it is necessary to know first what Wikipedia is and how it works, to explore all its projects and tools, to follow the 5 pillars and, above all, to know what is the role of the encyclopedias. (Rubén Hilari, Wikipidiya Editor)

Despite the fact that the collective actively participated in the project for two years, in 2012 its contribution decreased. The causes for this situation were the time availability by volunteers to collaborative projects such as Wikipidiya, and technical problems in using the tool, which, at that time, was the wiki language.

Contributing on Wikipedia is a way to promote and protect the Aymara language and its culture. (Hilari Quispe, Jaqi Aru collective)

Some of the main challenges of Wikipidiya are how to involve a large part of the Aymara population in the project, and how to create a community that keeps it active. Since 2013, the project has not had administrators or librarians.

Despite the fact that there was a group in charge of keeping the Wikipidiya site active, the Jaqi Aru organization could not maintain the motivation for the group to continue working. This was mainly due to the lack of incentives since, at the beginning of the project, the editing of articles on the platform needed an intermediate or advanced knowledge of the computer, which deterred many users to collaborate.

The new generations need to understand that there is a need to adapt and contribute in Aymara to the new digital media. (Ruben Hilari)

Currently, the group is running a project with funds from Wikimedia: Wikipedia Aymarata 2017, whose goal is to introduce Wikipidiya at the University of El Alto Bolivia, by training teachers and students to become readers and editors of Wikipedia in Aymara.

Some of the factors that influenced the formation of a community of Aymara-speaking volunteers for the project are the sense of significance and Cultural Identity of being part of the Aymara culture, and the need to continue to preserve and make visible their language and culture in different ways.