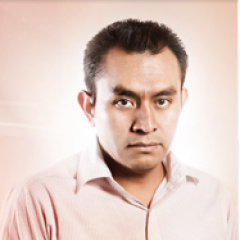 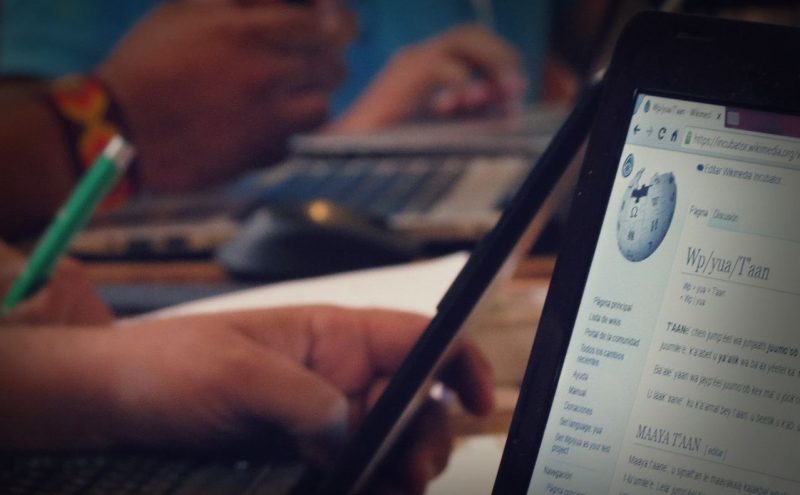 Historically, indigenous languages have not only been minimized but also marginalized, and this spans every domain, including cyberspace. This has limited the possibility of appreciating other communities, worldviews and traditions. Every indigenous language in the world is undergoing linguistic displacement and, consequently, disappearing. Although some remain active, their use is reserved for private spaces, forcing them to gradually give up their public domain and falling into disuse.

Wikipedia, like other new, non-commercial information technologies, can be used to open new public spaces for these languages, and gradually recover the ground lost to more dominant languages. No one today can legitimately doubt that Wikipedia is the largest collaborative encyclopedia ever created and hosted in cyberspace. Its commitment: “Imagine a world in which every single person on the planet is given free access to the sum of all human knowledge” is certainly ideal, and is demonstrated by the 37 million open-access articles (and in Creative Commons) written in 289 languages.

However, the representation of indigenous languages on the platform is very low, even though in Latin America there are 522 indigenous communities who speak 420 different languages – of the 6,000 that exist worldwide – and make up 10% of the total regional population. To date, only four official indigenous-language versions are represented: Quechua (19,900 articles), followed by Náhuatl (9,940 articles), Aymara (3,830 articles) and Guaraní (3,128 articles); and 29 more projects are in the Wikipedia Incubator.

In October 2016, Rising Voices, with the support of the Wikimedia Foundation, developed the study “Best Practices for Creating Free Knowledge in Indigenous Languages on Wikipedia” in order to effectuate a change and see a greater number of languages, their respective cultures and worldviews represented on Wikipedia. The general purpose of the study is to document and evaluate the status of indigenous languages on Wikipedia as a way of identifying the current capacity and the difficulties in creating and sustaining participation, particularly of native speakers. 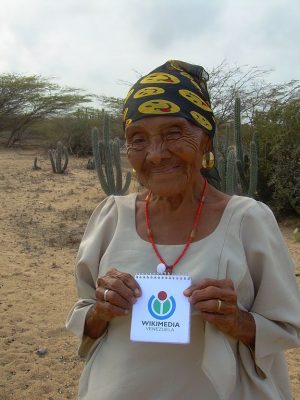 Finding 1. Despite the existence of 4 official indigenous-language Wikipedia versions and 29 projects in the incubator, native speakers are barely present in each of the projects evaluated. Most of the contributions come from users with limited knowledge of the language (in many cases, they know how to write it, but not speak it), but they collaborate or have previously collaborated on some of the Wikipedia versions or projects in other languages.

Finding 2.  All the projects were launched without prior knowledge of the language or the participation of native speakers or their community. The projects were promoted by Wikipedians who had no direct relation with indigenous cultures and communities.

Finding 3. Writing is still the only accepted means for creating new content by each user community and Wikipedia itself, so languages that have sufficient records and linguistic studies are those that have greater possibilities and breakthroughs in the platform. The use of video, audio and oral quotations has yet to be fully explored.

Finding 4. The main topic of discussion in the active projects is about the different ways each editor writes and spells. In the case of Wikipedia in Náhuatl and Quechua, classical writing systems are primarily used (which correspond to languages not currently spoken in daily life).

Finding 5. The issue of the reliability of references and the quality of the articles, which is widely discussed and highlighted in other Wikipedia versions, is not yet a topic of discussion in the indigenous-language versions. This is mainly due to the fact that the presence of native speakers and their communities is minimal and because the content is mostly: (1) translations of articles available in other languages, (2) definitions of words or objects, and (3) content that comes from information already documented in digital or printed media (available in Spanish, English or in the indigenous language itself). It wasn’t possible to identify content about the traditional knowledge of indigenous communities that has yet to be documented.

Finding 6. In the official projects, native users are calling for to be the ones who decide on the direction of their language on Wikipedia, to be part of the projects’ decision-making structure (admins or librarians) and that the encyclopedia should include information that meets a specific need of the indigenous cultures, not limiting itself to just reproducing and translating content from other languages.

Participating in Wikipedia and other projects was voluntary and what motivated each volunteer was the cultural identity they had as Aymaras, as well as contact with their language and culture in cyberspace. Contributing to Wikipedia is a way to support and protect the Aymara language and culture.

Challenges were identified based on the cumulative effect of the difficulties faced by the editors consulted and information collected in online surveys. The constraints and obstacles were arranged from a macro to a more micro-perspective, in descending order.

The testimonies of the interviewees portray a map with huge gaps in the active participation among native speakers of indigenous languages in digital communication projects such as Wikipedia. Most interviewees agree when they discuss this point. In general, they talk about four interrelated areas:

The main cause of the low participation of indigenous populations in Wikipedia is the digital divide that exists and distances indigenous populations from really taking advantage of Wikipedia’s potential offerings. This inequality originates from the economic, social, and cultural vulnerabilities suffered by these populations resulting in a lack of computers and the internet. This is compounded when there are no programs or content in their own language.

The interviewees spoke intensely about the enormous difficulty of reading and writing in indigenous languages because neither are a social practice in indigenous communities. In general, the main obstacles are related to the fact that most languages are oral and don’t have writing systems, and those that do are not standardized. Another obstacle is the scarcity of literature.

Another issue we find associated with this is that, because there is no single writing standard, editors find it difficult to accept some grammar used on the site.

Despite being a native speaker, one of the challenges I face is the written Wayúu, which is why I consult the Wayuúnaiki dictionaries.

Among these barriers, the interviewees mentioned that there is a lack of knowledge about using the tool; editing content in the Incubator is very complex and there are no technical support or support groups from which to seek help.

Furthermore, an interesting fact gathered by the online surveys indicated that 30% of respondents who can speak or write in an indigenous language do not know about the possibility of using Wikipedia in their language, along with 24% who indicated that they did not understand the rules and principles of the platform (free content, collaborative-nature, and its 5 pillars).

In several countries evaluated, more than 60% of indigenous people do not earn even a minimum wage salary. In all of the interviews, financial difficulties were mentioned as one of the obstacles to participating in digital collaborative projects. The marginalization and poverty experienced by the majority of the indigenous population make it extremely difficult for them to acquire a computer, books, and personally access the internet, which is required to participate in this type of project. 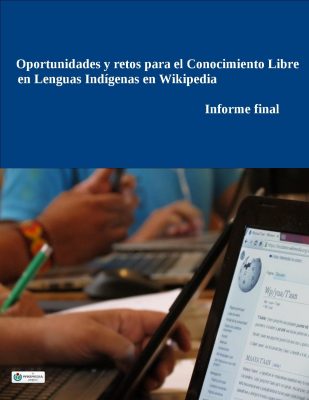 The final objective of the study is to explore the current status of Wikipedia in Indigenous Languages in the hopes of building a constructive dialogue and new ideas to increase linguistic diverse knowledge and incorporate the indigenous communities’ knowledge into Wikipedia in the future.

The methodology of the study was designed to meet these informational guidelines:

1. Document the background and context of 25 indigenous-language Wikipedia sites through interviews with their editors, and examine their technical, linguistic and sociocultural challenges more closely.

2. Analyze the current demand, impact, and potential use of these Wikipedia projects by different populations.

3. Identify the lessons learned and best practices, and make recommendations for future initiatives.

The report shows the current state of the discussion through the documentation of 12 case studies and interviews with the key players. A total of 24 semi-structured individual interviews, 163 online interviews (internet users of different nationalities and interests participated) and six e-mail interviews were conducted.

The report includes the methodology used, findings, lessons learned, best practices and some guidelines for developing content in indigenous languages on Wikipedia. We encourage our readers and those interested in the subject to read the material (in Spanish).