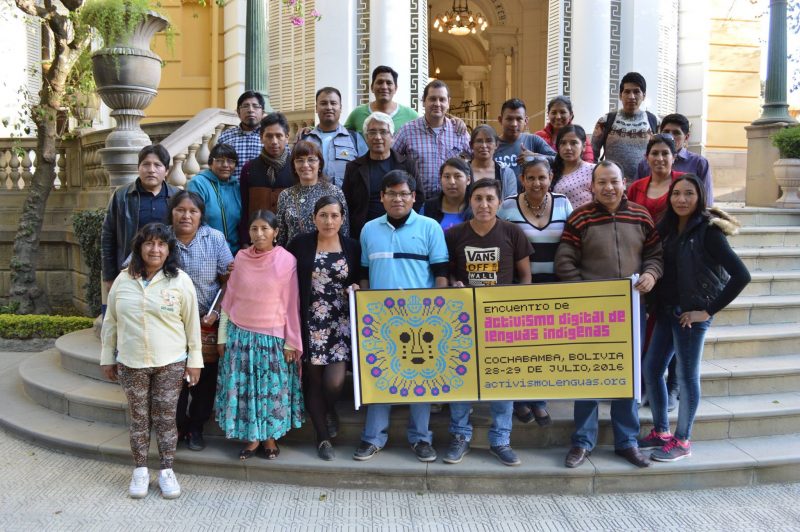 According to the country’s Constitution, all of Bolivia’s 37 languages are recognized as official languages. However, while this linguistic diversity can be observed in daily life, the same is not necessarily reflected on the internet, where Spanish remains the dominant language.

Even though digital initiatives have emerged to promote the other 36 indigenous languages, most concentrate on the languages with higher numbers of speakers like Aymara and Quechua. Many of the other 34 languages still remain without a significant online presence driven by native speakers.

Indigenous digital activists put special emphasis on the challenge of including all Bolivian languages during a two-day workshop held in the city of Cochabamba on July 28-29, 2016. The gathering was co-organized by Global Voices through its Rising Voices initiative in collaboration with local digital activists Gladys Camacho and Juan Carlos Romero, along with partners Jaqi Aru and Voces Indígenas Urbanas.

The event’s host was the Simón I. Patiño Pedagogical and Cultural Center. This Bolivian workshop was another in the series of workshops held across the region with local partners, including previously in Mexico, Colombia, and Peru.

Leading up to the workshop, a national open call for participation was put out focusing on indigenous internet users who are already working to revitalize their native languages. Participants were chosen taking into account geographic and linguistic representation; a demonstrated commitment to sharing their knowledge and skills with their own communities was also a determining factor.

Banner for the workshop.

Approximately 50 applications were received, and as expected, Quechua and Aymara applicants were the most represented among those interested in taking part. However, after outreach efforts especially to communities in the Bolivian Orient, participants representing Guaraní, Chácobo, Bésiro, Mojeño Trinitario, and Yurakaré communities also were selected.

In total, 25 participants were invited to take part in the two-day workshop to share their experiences, build new digital skills, and make connections with other Bolivians working towards revitalizing their native languages through the use of the internet.

Languages know no borders, so some of the indigenous languages of Bolivia are also spoken in neighboring countries. Upon discovering the call for proposals, a group of activists from Resistencia, Argentina who speak the Qom language (or Toba as it is known in Bolivia) also requested to take part in the gathering.

The gathering’s primary purpose was to create a space for experience exchange among the different activists. Over the course of two days, there were hour-long plenary sessions led by facilitators and participants that touched on linguistic and technical challenges related to language use on the web.

Much of the rest of the program focused on personal presentations of their own personal projects. For example, Elias Ajata, a prolific blogger from the city of El Alto, has been creating content on YouTube, SoundCloud and other social media sites. During his presentation, he showcased the variety of memes and other content created through his project Aymar Yatiqaña, which is primarily shared on the Facebook group of more than 8,000 members. The following video created around the time of the 2016 constitutional referendum where voters decided whether or not to allow the president and vice president to run for a third consecutive term. The video uses Aymara-speaking puppets to show the contentious divide between voters opting for “Yes” and “No” votes.

Another activist from El Alto, Josue Qhispi, has been uploading lessons to learn the Aymara language on his Wix site called Aymaryaya, which he also shares on his Facebook group.

Volunteer translators Victoria Tinta and Gloria Chambi spoke about their motivations for participating as editor and translator with the Global Voices in Aymara project, which provides translations of news stories from Spanish into the Aymara language. This work also included a pilot project producing repackaged audio content of these translations for online use and with partner radio stations, such as Radio San Gabriel, which also took part in the event.

The host city of Cochabamba is considered to be one of the cradles of the Quechua language. On a local level, the public university San Simón (UMSS) has played an important role in developing resources to promote the language online, such as the multimedia Quechua podcast platform created by the Applied Linguistics for Language Teaching team at UMSS. In addition, two of the workshop organizers, Gladys Camacho and Juan Carlos Romero, have been very active with the Linguistics Department of the university and have also participated as Quechua teachers. Both shared their experiences promoting the language through a variety of multimedia platforms.

Camacho continued her graduate studies at New York University where she contributed to the Rimasun audio podcast project. As part of his teaching duties, Romero filmed videos depicting daily situations using the Quechua language, including the following that took place at the dentist's office.

Based in the Department of Santa Cruz, the Voces Indígenas Urbanas project shared their work listening and amplifying the voices of indigenous communities living in the country's largest city of Santa Cruz. Among the topics that they regularly discuss include the importance of maintaining the language. Several of the team's members regularly promote their native language on social media.

The Bolivian workshop continues to demonstrate the interest and need for gatherings such as this to connect indigenous internet users who have made a commitment to preserve and advance their languages with the aid of digital technologies. Their own experiences often mirror those of others regardless of language, and real and virtual spaces can help share these lessons learned and become the building blocks for the creation of local networks of digital activists who share a common mission.