The Quechua Memes initiative aims to share spoken and written Quechua across social media using jokes, therefore promoting the revitalization of the customs of the people with a reflective joke, in such a way that the amusement and comic relief is blended with the much more serious intention of raising awareness. The work is coordinated by Marisol Mena Antezana (Chaska Kanchariq), who comes from the Apurímac region in Peru.

URLs of the project

The project emerged in 2015, derived from a personal thesis project of Marisol Mena (The strengthening of Quechua through poetry and song) which was developed in 2009, and which came to consolidate over time. There was a precedent prior to the creation of Quechua Memes, with the launch of the Sentimiento Quechua (Quechua Sentiment) project. It now has the support of 10 collaborators, people who for the most part have a good command of the Quechua language and culture, so the main activities of support relate to writing messages in Quechua. 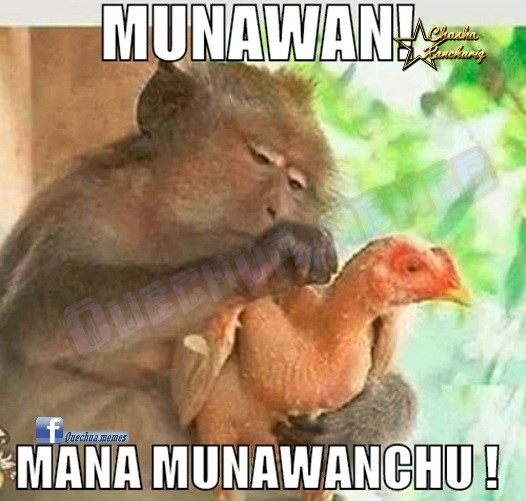 “He loves me, he loves me not”, an example of one of the images with the greatest impact from the project.

According to statistics from the Facebook page, the people who are most interested in the project are 60% men, with the average age range of 25 to 34 years. The difference corresponds to women, with an average age of 18 to 24 years. It has been observed that the presence of content in Quechua with the reflective themes of leadership and self-esteem are stimulating among users, and trigger a good practice of interaction and communication.

The main cities that the project has reached are Lima, Cusco, Ayacucho, Huancayo, Arequipa, Apurímac, Puno, Callao, Puerto Maldonado, San Martin, Pucallpa and other cities in different regions of the country. For now, it has reached users from approximately 60% of Peruvian territory. With regards to its presence abroad, it has users in countries like Bolivia, USA, Italy, Argentina, Chile, Spain and Colombia. The statistics also show that 80% of access has been made using mobile devices. As for the nature of the most popular content, it has been identified that the greatest impact has come from that which relates to the traditions and customs of the people.

The response from Quechua speakers concerning the nature of the project has included reactions to the type of images used, as well as specific aspects of the word-processing, paying particular attention to the grammar of the language, as the coordinator of Quechua Memes highlights:

Yes, I have received [and receive] criticism, because we are putting a foreign image with a message in Quechua, and likewise, they bombard me with trivocalism and pentavocalism (whether Quecha has three or five phonemic vowels),… I tell them that Quechua belongs to the Andean world, and the memes to the Western world, so we are trying to unite the two worlds. We seek to be open-minded, always having respect.

One of the limitations the project has faced relates to the plan of distribution for the generated inputs. A problematic experience was had when opening an official page for the initiative. This was due to the fact that the administration of the website had been presented as free, but over time, fees were introduced for accessing these previously available features. As the respective payments were not made, the website had to shut down, and with it, multiple contributions which had been shared on this space were lost. After this experience, the team decided not to attempt such publications for fear of losing more material. So, efforts were focussed on obtaining more followers on social media, in order to subsequently boost other dissemination channels, for instance, the blog.

On the other hand, the availability of infrastructure and connectivity are also presented as factors which limit the development of the project. Many potential users do not have internet access from their mobile devices, whereas, in other cases where connectivity can be individually financed, it is restricted to periods where each user has economically favourable conditions.

The project currently finds itself focussed on the stage of “raising awareness”, during which it is committed to the distribution of images, many of which belong to the project, are sent in by followers, or are downloaded from the internet. To maintain the effectiveness of the posts, and redirect the subjects to touch on, an evaluation is usually made in advance, observing how followers of the posts respond. From the evaluations, it has been noted that followers are more receptive to publications of images with text.

Another trial which has been carried out is the translation of content – posts only in Quechua were launched, with the intention of bringing about curiosity in users, thus, triggering questions promoting the learning of the content. However, followers suggested that a translation should be written in Spanish for people who do not understand Quechua. That is how they determine the present structure of the publications. These dynamics have allowed them to redefine strategies for producing content, and strengthen the activities proposed in the development stages of the project. 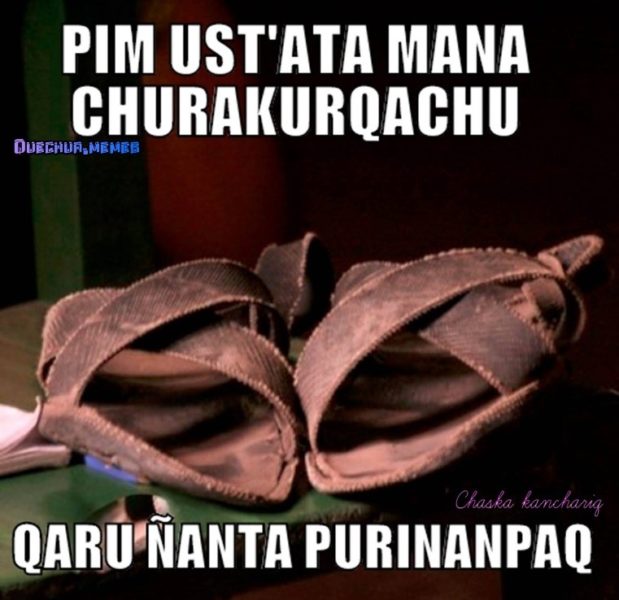 “Who hasn't put on sandals to walk long distances”, an example of an image referring to the subject of customs and traditions of the people.

Among the mid-term plans is to make videos, using a similar mechanism to that of “Sentimiento Quechua”, with the inclusion of local music and synchronization of native speakers of the language.

In the long term, Quechua Memes and its associated projects are seen as a nucleus from which the formation of a cultural institution can be inspired, and therefore, activities in favour of artistic development can continue to be promoted.