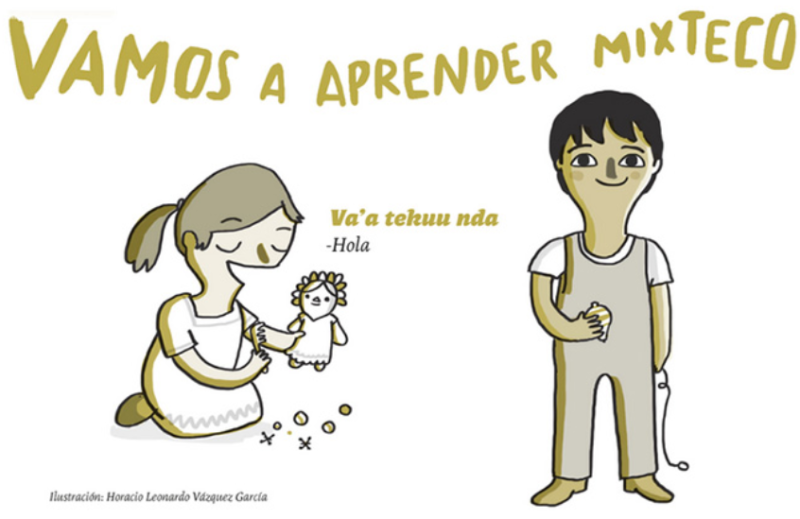 Vamos a Aprender Mixteco (‘Let's Learn Mixtec’) is an app based on the teaching method developed by Donato García for learning Ñuu Davi, a variety of Mixtec which belongs to the Oto-Manguean family of languages and is spoken in Santa Inés de Zaragoza in the state of Oaxaca, in southern Mexico. The app was developed through a collaboration between the digital publishing company Manuvo and the Digital Citizen Laboratory (Laboratorio de Ciudadanía Digital), a training programme run by the Spanish Cultural Centre in Mexico (Centro Cultural de España en México) and Fundación Telefónica. The material is divided into 20 lessons which cover topics such as greetings, numbers, community life, wildlife, local geography and so on, the aim being to use technology to generate interest in the languages, the system of community life and the cosmogony of the indigenous peoples of Mexico.

The app was launched in June 2015 and is available for free through Google Play and iTunes for use with Android and iOS operating systems.

Links related to the project:

This development has set a precedent for other initiatives, such as the proposal for a ‘digital content ecosystem for indigenous languages of the Americas’ put forward by Grupo Nuu, of which Manuvo is a part, and which has applied for international funding such as that provided by the Multilateral Investment Fund (MIF) of the Inter-American Development Bank.

The app was launched on June 3, 2015 through Google Play Store and on June 12 of the same year through the App Store. Within the first month of its launch it had been downloaded by 20,000 people throughout the world, and this number has approximately doubled since then.

What makes this project stand out is that it was completely organised and carried out horizontally, thus supporting the process which had already been initiated in the community, and the role of the cultural managers is to bring together, introduce and integrate people who would otherwise be unlikely to meet naturally or by chance.

The application was in fact conceived as a pilot project to begin with, but when it turned out to be very attractive, and that special illustrations had been made for it, the recordings were made with the involvement of community members, and the results were to everyone's satisfaction. They tell us:

The Mixtecs live around the town of Nochixtlán, and this application has meant that many people in the United States, Chicago, Oaxacans who live elsewhere, researchers, institutions, people interested in the language, have come to understand that it's possible to focus on the theme of indigenous peoples and their communities and the different groups involved in this field through the use of digital platforms.

The app was widely downloaded, it was very interesting and it drew the attention of many people, we've been told that it became known throughout the world and it was one of the top-ranking educational apps for several weeks. There are plans to launch two more apps by the end of this year, one in Nahuatl and another in Purépecha, and the mode of work and development for these has been very similar.

The project itself was a pilot scheme, but it enabled its creators to understand that such initiatives are an excellent way of creating and sharing material, which is after all one of the main objectives of these communities: ‘to disseminate their language, their culture, establish processes which can introduce the younger generations to attractive ideas and topics and which showcase their histories, traditions, cultures and forms of knowledge’. This is an excellent way of doing so. The Spanish Cultural Centre in Mexico (Centro Cultural de España en México) had to pull out of the project because in the view of Fundación Telefónica the target audience had gone beyond the local population, the aim of the project and their partnership being a collaboration involving indigenous communities and apps. 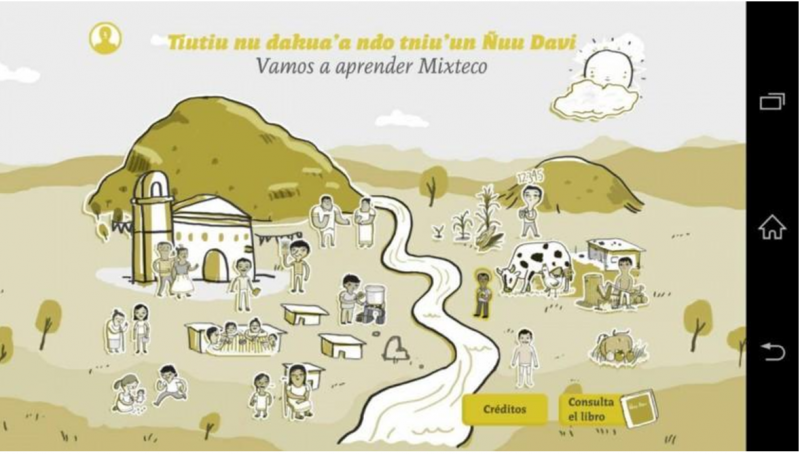 It is now more important to take into account the speakers of indigenous languages, the use of platforms and modes of communication which they are adopting, such as smartphone applications. This opens a whole new perspective which makes it possible to understand what it means to be young in an indigenous community and how to introduce these young people to all this cultural and historical content. On this point we are also told that ‘young people seem to be born with smartphones in their hands and this makes it more difficult for them to learn their language and discover more about their culture’.

One of the managers of the project has issued the following invitation: ‘nothing has been decided for sure, everything is yet to be done, this is just a different path which shows us that there are new ways of learning, there is another way of working or strengthening processes within the community through the use of technology’. We are also faced with the challenge of dispelling certain myths, as advances and developments in technology have not been designed to undermine communities and their traditions. Indeed, these tools can have the opposite effect, they can be used to foster what is happening inside these communities, to give more prominence to many different activities, voices and  processes.

As a reflection, it can be said that there are many people working on projects which are sometimes identical or can also be very closely related. The Internet makes it possible to create and consolidate networks for sharing content, working collectively, publicising initiatives, promoting the involvement of others, but also for strengthening processes and generating joint collaborative projects. Concerning the internet they have this to say:

‘The internet and social networks are tools which enable the empowerment of communities so that different processes which are being conceived there can be strengthened. This means thinking, enabling, displaying or developing new ways of using these tools which can be very useful in promoting and disseminating the heritage of indigenous communities. Ultimately, it's also very important that they can create new content, providing spaces and broadening their perspective in these forms of media.’

As to the lessons for others who might be interested in doing something for their languages using the internet, they say: ‘there are other ways of disseminating and strengthening many processes within the community and technology is a tool which can be used for this, the internet, social networks and different digital platforms’.

‘It's a fact that many young people in indigenous communities have more contact with technology but somehow they have less contact with their language, so it's a complicated process because these young people are losing out and they're not being integrated into an indigenous community, obviously not in every context or every case. There are many communities where the language is very strong and it's a suitable medium of communication for everyone, so people learn it and use it, but there are many cases in many countries where the younger generations are disowning somewhat their identity and their language’.

To conclude, they tell us that ‘it's very important that more possibilities and processes are created so that communities and their members can also use technology to enhance their development, and in order to open other perspectives and create other contexts online and share them with others’.