Dozens of analog audio and video cassettes containing ancestral stories from a community of Witoto – M+n+ka indigenous people, as well as documentation of the sacred ritual called Yadiko, were recorded by external researchers in the 1980s. This rich content, however, remains inaccessible to the community of Cabildo Milán located in La Chorrera in the Colombian Amazon region, where the recordings were made. A young university student named Ever Kuiru, who was orphaned at at a young age and left the community, wants to transfer these recordings to a digital format and present them to the community in the hopes of inspiring and training others to make their own podcasts. Through this process, Ever hopes to maintain ties with his roots through the stories of his late father and grandfather found in these recordings.

Ever has been active in sharing these new discoveries by digitalizing these cassettes into audio format, transcribing, and translating the stories, all with the consent of the community. Other project members are helping to record audio and video stories in the Amazonian community. Workshops are also being held with local residents so that they can learn how to capture audio stories using the digital recorders. 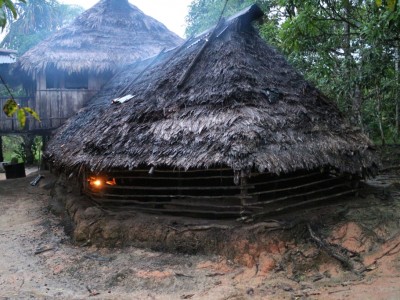 Eikofɨ: In the Bosom of Mother Earth