We regret to share that our colleague, Boukary Konaté passed away in September 2017. Please read this tribute post to him and his work. One prolific Malian blogger and Best of Blog winner, Boukary Konaté, is originally from the Ségou region in Mali, which is located along the Niger River. Even though he lives and works in Bamako, he still holds strong binding ties to his community back home. He has been an innovative local leader in the use of citizen media tools as a way to keep residents in the Ségou region informed about news taking place in the capital and around the world. For example, he provided live Twitter updates with scores and news of the 2010 World Cup football matches taking place in South Africa. These microblogging messages written in French and the native language of Bambara provided valuable updates to the football fans in Ségou without television sets.

Konaté's project continues this communication flow with the residents of the Ségou villages, but the project will add a teaching component where villagers will learn how to send their own news and information back to Bamako. Through hands-on workshops that will take place in various villages, Konaté has trained the residents how to use their mobile phones to send news about the communities to the residents living in the capital. They will also receive feedback and comments from the readers, with all of the information to be collected on a community portal made available in French and Bambara. This two-way communication will strengthen the relationship between residents in the villages and those now living in the capital city. Konaté has been a tireless advocate for greater access to the internet for rural Malian communities. He has participated in a number of projects including an initiative to hack together an internet connection using a 3G connection and solar panels to power his laptop during his journey up and down the Niger River. 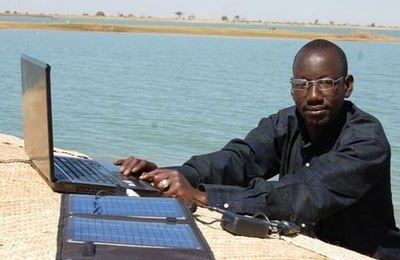 When the Village Awakes: A New Malian Culture Blog

Ségou Villages: Boukary Konaté Is A Finalist At BOBs

Ségou Villages: Finding a Way to Connect in Rural Mali